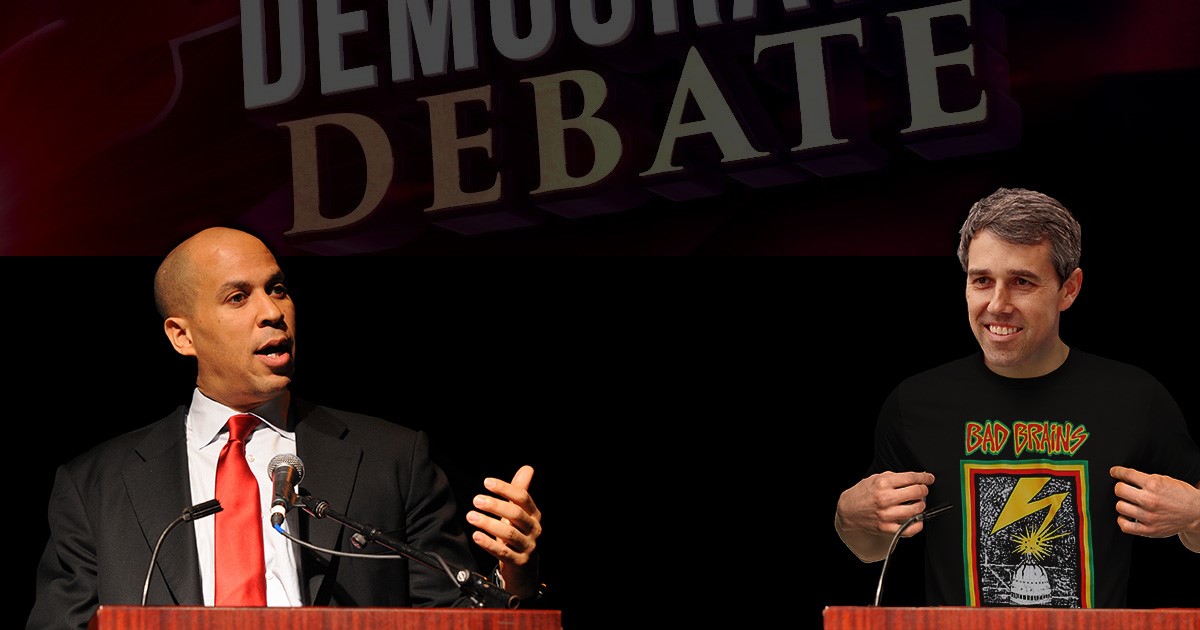 “I’ve long been a fan of Bad Brains — they had a huge impact on my own music, not to mention bringing their ethics into my political career,” said O’Rourke. “I celebrate their entire catalog… especially their later reggae stuff. Hey, do you think Cory noticed the shirt? I mean, it doesn’t matter, he probably did. But really, what do you think?”

Senator Booker admitted he did notice the Texas Representative’s attire, but claimed to have no connection to the Washington, D.C. hardcore icons.

“It got pretty weird when he said, ‘I don’t want to go I against I,’ and then looked at me with this huge grin,” said Booker. “Is that a reference I’m supposed to understand? I don’t even know what Bed Brain or whatever is. But what I do know is that I want the American people to live in a country where they can feel proud to raise a family, and that is why I am here tonight.”

The debate moderators, however, were dismayed by O’Rourke’s tone-deaf pandering.

“We were deeply disappointed with Mr. O’Rourke’s shameless self-aggrandizing,” said ABC news correspondent Linsey Davis. “White dudes have been using Bad Brains to gain cheap cred and deny their own prejudices since before ‘Rock for Light’ came out. And that shirt looked brand new — I think, if Beto truly wants the highest office in the land, he’ll have to release receipts for his record collection to prove he actually listens to half the bands he talks about.”

When reached for further comment, O’Rourke was found wearing a Bikini Kill T-shirt and telling Elizabeth Warren he’s “totally down with the whole ‘chick power’ thing.”