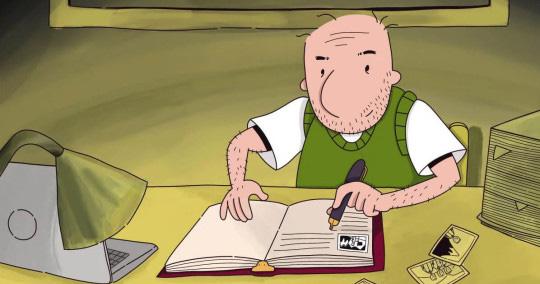 If you grew up in the nineties, the alternative rock radio hits of the day probably bring you back to things like eating Nic Nacs, bagging nematodes, and reading “Man-O-Steel Man” comic books. But for the artists behind those hits, the memories they represent can often be troubling reminders of difficult times, as we learned in a recent interview with Doug Funnie, the man behind the now classic “Bangin’ on a Trash Can.”

“I couldn’t believe how big it got. They played that shit in the mall food court like we were The Beets or something,” explained the songwriter. “But what most didn’t know is, I was singing about whoring myself out in seventh grade to buy smack.”

While the sudden success could have turned his life around, those close to Funnie remember it only worsening the situation.

“Just cuz he didn’t have to sell his tight, little khaki-clad ass for dope anymore didn’t mean things weren’t bad,” percussionist and former songwriting partner Skeeter Valentine recalls. “Things don’t get better when you give an addict Radio Disney money. When the wave started to crash, all he cared about was getting another hit. The Beets sued him for ripping off ‘I Need More Allowance.’ Few months later a security camera caught him beating the HONK-HONK out of his neighbor Mr. Dink. That was when we knew it was over.”

After the band walked away, Funnie made several attempts to reinvent himself and recapture his early success.

“I always liked the kid. He wrote catchy songs. But the banjo thing was never gonna last,” admitted former manager Beebe Bluff. “So we tried new looks, new styles. Scored a minor hit with ‘Wa Na Na’ under the name Jack Bandit, but by that time rock radio was dominated by west coast skate punk bands like Doctor Klotzenstein and The Klotzoid Zombies.”

As for where Doug Funnie is now, he’s back in Bluffington living a quiet life. He’s recently found some modest fame again with his successful independent comic series “Quail-Man.” He still enjoys playing the banjo and can occasionally be seen playing solo renditions of his classics at The Honker Burger.