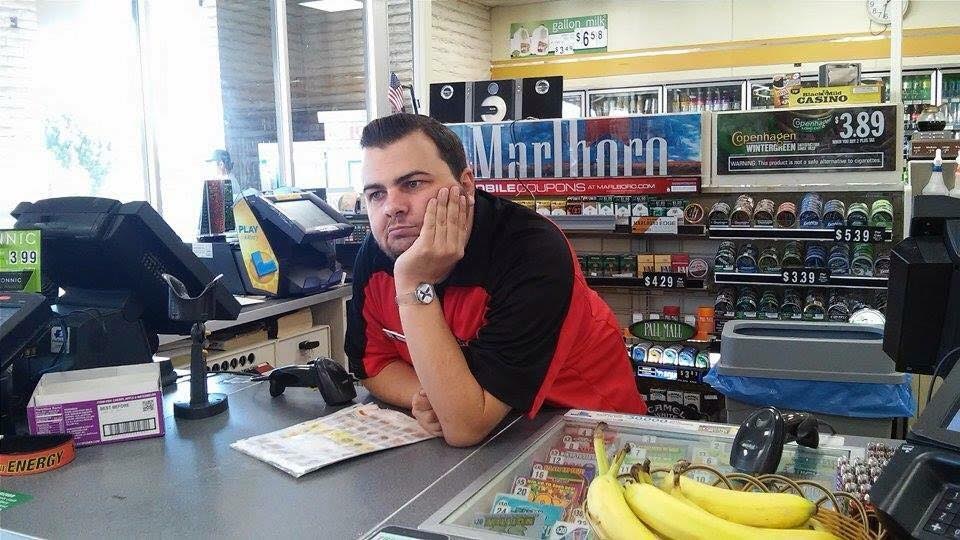 MILWAUKEE –  Local convenience store clerk Mark Winston is afraid to request time off from the dead-end job he despises, despite his band’s seven-day midwestern tour being a mere six weeks away, worried sources confirmed.

“I’m going to get out of this place one day,” said Winston of the minimum wage job which mostly consists of selling cigarettes and scratch tickets to people waiting for the sweet release of death. “But I already used my sick days on that East Coast weekend and my manager is a real dickhead. I don’t even want to bring it up to him.”

“Plus, I have responsibilities. If I leave who is going to fill up the nacho machine?” he added, looking around skittishly. “Carter? Ha! Carter doesn’t know what the fuck he’s doing — that guy can barely stock Skittles.

Winston’s job keeps him confined in the tiny 4×4 space behind the cashier for hours at a time. He gets one meal and two state-mandated 15-minute breaks each day. Still, somehow he considers his position at Eddie’s Gas & Liquor as a blessing.

“Regional managers make like 60k, dude,” said Winston while restocking the beef jerky display in a hurried, panicked fashion. “I can’t afford to pass up this career opportunity. Just a couple more years then I’m good. Plus my boss is really tall and loud and I don’t want to ask him, so I don’t think I’ll be able to tour.”

Winston’s bandmates in The Squad Crew Brigade don’t understand his unwillingness to request the time off from his job.

“Dude, he works at a fucking gas station,” said lead singer Diego Santos. “He still lives with his parents so it’s not like his life would end if he got fired. Worst case he could get a job at Chipotle like Chad and make more than $7.25 an hour… I mean what the fuck? I think he’s got Stockholm syndrome. Is cleaning a truck stop toilet really worth more than playing with Demon Seed in Chicago?”

As of press time none of the promoters of The Squad Crew Brigade’s tour had been notified of the band’s possible lack of bass player.