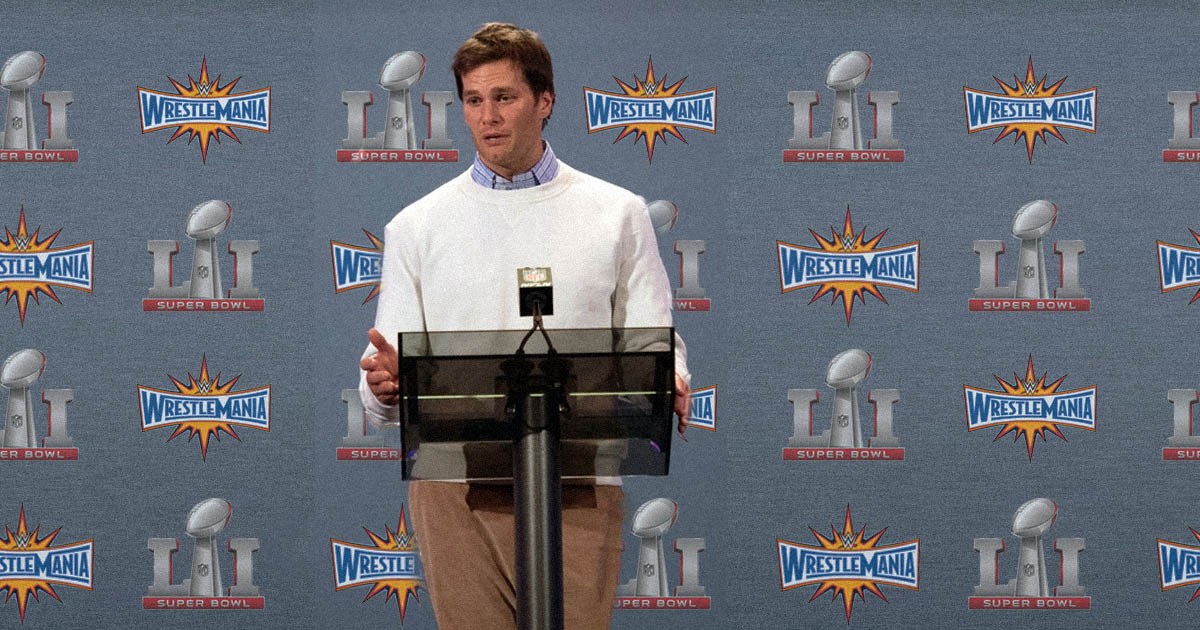 New England Patriots quarterback Tom Brady addressed the media ahead of Super Bowl 51, describing the event as the Wrestlemania of the NFL.

The biggest story leading up to Super Bowl 51 in Houston has been Brady’s quest to stand alone as the only NFL quarterback to win five Superbowls. Brady, however, seems more concerned with the spectacle of the Super Bowl itself.

“The Super Bowl truly is the showcase of the immortals,” said Brady at a press conference last week. “We work all year just to get the chance to perform under the bright lights of the Super Bowl – it’s our Wrestlemania.”

When asked about his strategy for attacking and defeating the Atlanta Falcons defense on Sunday, Brady explained that winning or losing wasn’t his main objective.

“It’s not about all that for me anymore. 100 million people are going to tune into the Super Bowl. Is it really important if I win or I lose? Nah, the business has been exposed for what it is at this point.,” said Brady. “I’m focused on entertaining the people. If that means I have to take a few sacks, it’s all part of the show. If people pay to fill that stadium, and the sponsors buy the ads, I’ve done my job.”

Brady has become a polarizing figure over the course of his career with accusations of cheating to win hanging over him. Brady scoffed when these accusations were brought up at the press conference.

“Uh, have you ever heard of getting heat?,” an incredulous Brady replied to a question about the deflategate controversy that has surrounded him for years. “Who let this mark in here?”

Brady’s feud with NFL Commissioner Roger Goodell over deflategate has become a top draw for the NFL in recent years.  Becoming agitated with the line of questioning from reporters who didn’t seem to grasp the nature of the entertainment aspect of the NFL, Brady went on a rant of a closing statement.

“My act puts asses in the seats, that’s for damn sure. That’s what I care about, and that’s what the league cares about, whether they admit it or not. After the game, when Commissioner Goodell hands me that Lombardi trophy for the fifth time, I’m going to drop his ass with my patented Brady-Bomb. It will be the highest rated segment in television history, and that’s what the Super Bowl is all about. Making Super Bowl moments for the NFL Universe. Believe that, Brady out,” he said as he dropped the mic and stormed off stage.