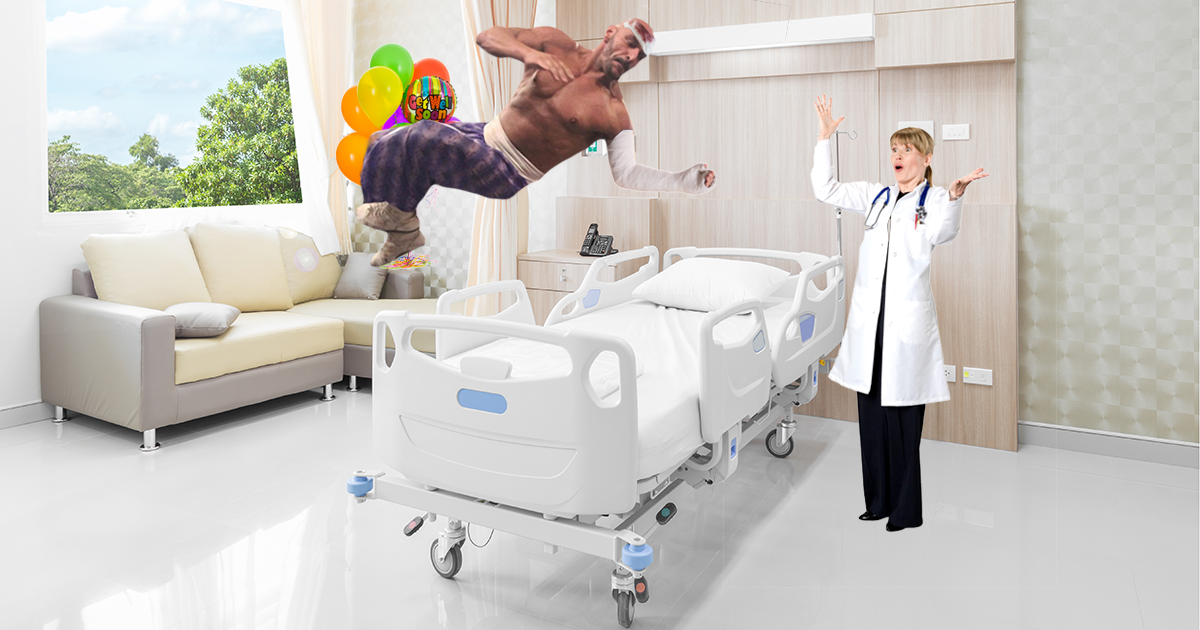 Former ECW champion Sabu recently awoke from his hip replacement surgery and instinctively moonsaulted through his hospital bed. According to nurses at Henry Ford Hospital in Detroit, as soon as Sabu regained consciousness he spun into a state of frenzy, back flipping off of a desk through the bed, then attacking a male nurse with a bedpan-assisted Arabian Facebuster.

“I’ve seen patients react violently when awakening from anesthesia, but never anything like this,” said Dr. Sally Fulci, Chief of Arthroscopic Surgery at Henry Ford Hospital. “It was like he didn’t care if he died, if I died, or if everyone in the hospital died. He was acting like a maniac.”

Sabu was resistant to the hospital staff’s attempt to restrain him, and a brawl ensued. Making the ordeal even more hectic was the presence of Sabu’s longtime friend and one-time manager Bill Alfonso. Alfonso was seen incessantly blowing a whistle and yelling at the doctors to use super glue to reinforce Sabu’s stitches, according to nurses.

“Listen up, daddy! Nobody’s gonna stop Sabu from doing what Sabu’s going to do!,” Alfonso boasted over the commotion. “Even if you take out his hip, he’s going to moonsault through that bed and split it right down the middle, daddy!”

The melee eventually spilled out into the hallway where Sabu and a doctor became entangled together in a knot of medical tubing.

“Dr. Lebowitz struggled to try and subdue the patient, but he just kept fighting as they became more and more entangled in the tubing. Once they could hardly move, the patient finally calmed down,” said Dr. Fulci. “There was no way to free them from the mess other than to cut the tubing. It was quite the spectacle.”

No charges were pressed against Sabu, although he has been asked to schedule all follow-up appointments at a different medical facility.

“It was the most hardcore hip replacement we’ve ever had here,” said Fucli

When asked to comment on the situation, Sabu only got down on one knee and pointed toward the sky.