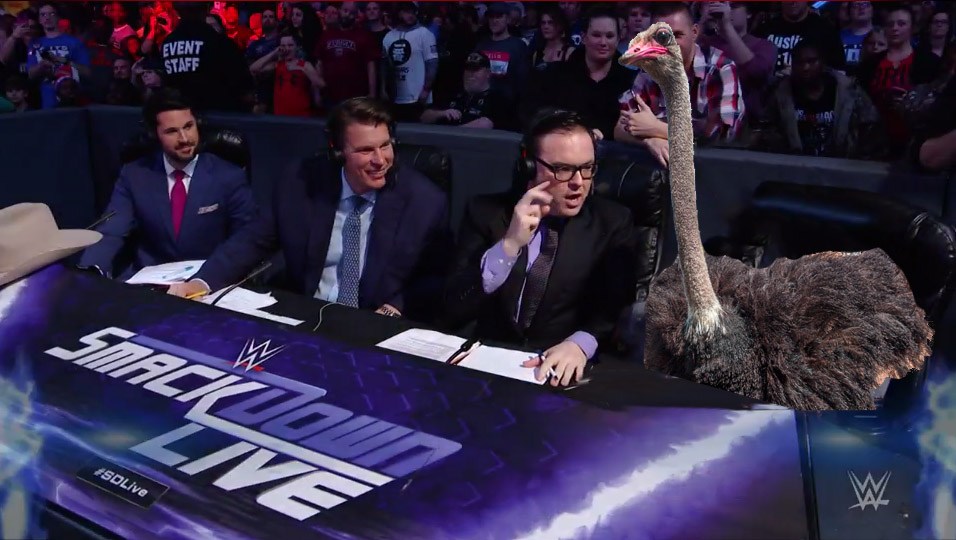 The substitution was not been detected by fans, WWE performers, or even Otunga’s ringside colleagues.

“Otunga called in sick two hours before show time, so I had to get creative,” Bryan told Talking Smack host Renee Young. When asked why he had handpicked Jellybean to fill Otunga’s chair, Bryan said, “I didn’t think anybody would notice the difference between David and a large flightless bird.”

“David contributed as much to the commentary as he normally does,” fellow announcer Mauro Ranallo said. “He seemed like the same ol’ David,” added color commentator JBL. “Always tickling me with his long, curled eyelashes and honking at the popcorn guy to give him some.”

“I thought something was off,” admitted Tom Phillips, another one of Otunga’s colleagues. “David seemed unusually perceptive and eloquent last night. He said some thoughtful stuff during the Alexa Bliss/Becky Lynch match that really made me appreciate Lynch’s versatility as a performer.”

Jellybean’s fill-in spot for Otunga was so convincing that even when the ostrich went on a panicked rampage during the main event, nobody could tell the difference.

“Halfway through the main event, Luke Harper threw Dolph Ziggler into the announcer’s table, and David just goes ballistic,” said Ranallo. “He starts flapping his wings and running around the ringside, kicking up those freakishly long spindly legs he has. He looked like Drake whenever he hears that hotline bling. MOMMA MIA!”

Jennifer Hudson, Otunga’s longtime fiancee, was in the audience and calmed down the spooked ostrich with a sultry R&B torch song. “You’re with Mama now, baby,” Hudson was heard to have said as she wrapped her arms around the trembling ostrich’s neck.

When Young asked if Jellybean would replace Otunga full-time, Bryan refused to comment. JBL, on the other hand, said he was “all for it,” while cradling a giant egg in his arms. “David never leaves me breakfast in his seat.”