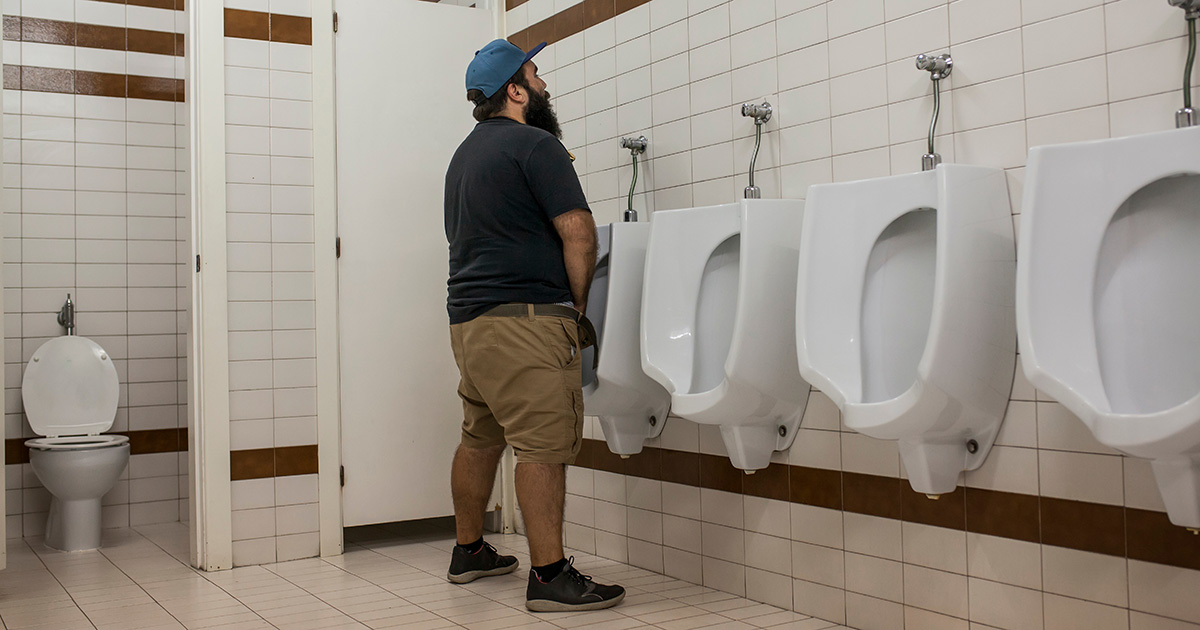 HARRISBURG, Penn. — Local human disaster Jason Melvin recently managed to pull a complete 180 in every aspect of his previously pointless existence with the help of a “You Are Important” sticker strategically placed in the lower left side of a urinal, newly optimistic sources confirmed.

“I was really close to the end there for a while. My wife left me, I lost my job, my roommate stopped hooking up with me and then she kicked me out after learning that I had a wife and no job,” explained Melvin of his pre-sticker situation. “I was pretty loaded that night, but once I saw that sticker getting blasted by my forest green pee stream, I realized that I really do have a lot yet to offer. I got a good new job, a nice apartment, I’m dating an absolute jewel of a woman and, not to get too ahead of myself but, I’m pretty sure I’m gonna be able to fuck a few of her friends and her sister. Yep, everything’s coming up Melvin!”

“I always knew that sticker would make a difference. Putting it in that urinal was the right, smelly decision,” said Samuelson while licking a salty substance off the webbings between his fingers. “There is a stigma out there that men need to be stoic and they can’t express feelings or accept kind gestures. So I make sure my stickers reach men at their most vulnerable; while their dicks are out in a public restroom. Letting everyone know that they are important was totally worth the hepatitis!”

Longtime bartender Cathy Jarvis says there is a rich history of lavatory decoration.

“It kinda comes and goes in waves. Those stickers get eroded and rot off with punk piss every few weeks so there’s rarely a consistent message,” said Jarvis. “That time someone put a ‘Heroin Kills’ sticker in there nearly bankrupted our door guy, he’s been providing decent smack for years and suddenly the market dried up. A few weeks later someone put up a sticker that said ‘Heroin Makes the Pain Go Away’ and business picked back up. It’s all just pee-based politics.”

At press time, venue staff had been directed to “clean that fucking urinal once and for all,” potentially negating future rehabilitative stickers.