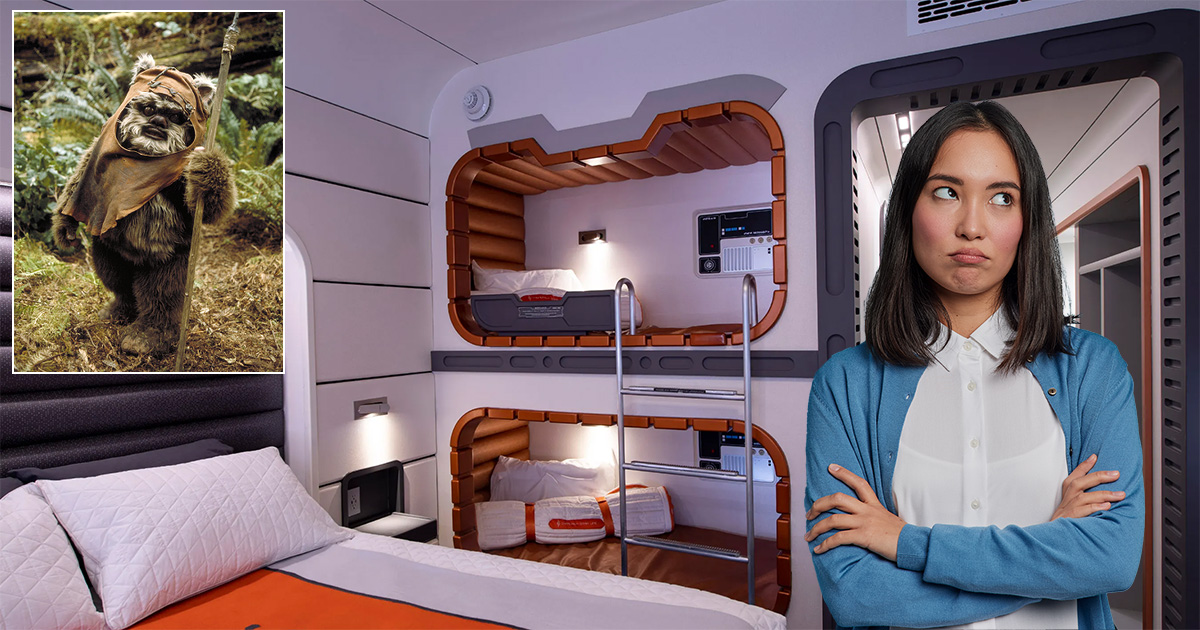 ORLANDO — Krista Lane, a librarian, mother of three, and self-described “Star Warrior of the Resistance,” reportedly wasted her weekend at the Star Wars: Galactic Starcruiser novelty hotel searching for a real-life ewok to fuck.

“I had been saving up for this weekend for so long,” Lane said, still wearing her all-access bracelet for the hotel’s Late Night Cantina. “I completed a Whole 30 to look as sexy as possible in my Leia-style golden bikini, left my kids with my ex for the weekend, and promised myself I wouldn’t answer a work email until I’d found one of Endor’s finest furry little sex machines and had the sort of night I’d been fantasizing about since I first saw ‘Return of the Jedi’ in 1983. I’d like to say at least I tried, but I know what that hot little piece of ass Yoda would say: ‘Do or do not. There is no try.’”

Bartender Daryl Watt said that in the brief time he’s worked at the Galactic Starcruiser, he’s seen many colorful characters.

“I did see Ms. Lane there, and like many of our customers, she seemed…how do I say this politely? She seemed really randy for these Star Wars characters,” Watt confirmed. “Honestly, I couldn’t tell if she was looking for a cosplay-type scenario or if she honestly thought ewoks were real. But I’m not really surprised by anything anymore. I’ve seen adults who think they’ve been called to the Dark Side. I saw a grown man who wrote in his will that he wanted to be frozen in carbonite when he died. One guy kept telling me I was the droid he was looking for and asked if he could cover me in metallic paint. It’s gotten pretty weird, but fuck it, the tips are good.”

Alara Delaney, an executive at Disney Hotels and Resorts, suggested that the organization was open to creating more experiences for sexually-charged Star Wars fans to connect.

“Our market research has shown that while Disney remains a family-friendly company, there’s a growing subsection of loyal fans seeking to explore their sexuality through our associated brands,” Delaney said. “While we’re reviewing options to tap into this growing market, we wish to clarify that Disney is not formally associated with any Marvel Cinematic Universe key parties, the association of Star Wars Swingers, or whatever is happening at the Balloo and Friends Rubber Room.”

At press time, Lane was on her flight home seen asking a man dressed as Jar Jar Binks to “join meesa for a quickie in the airplane bathroom.”