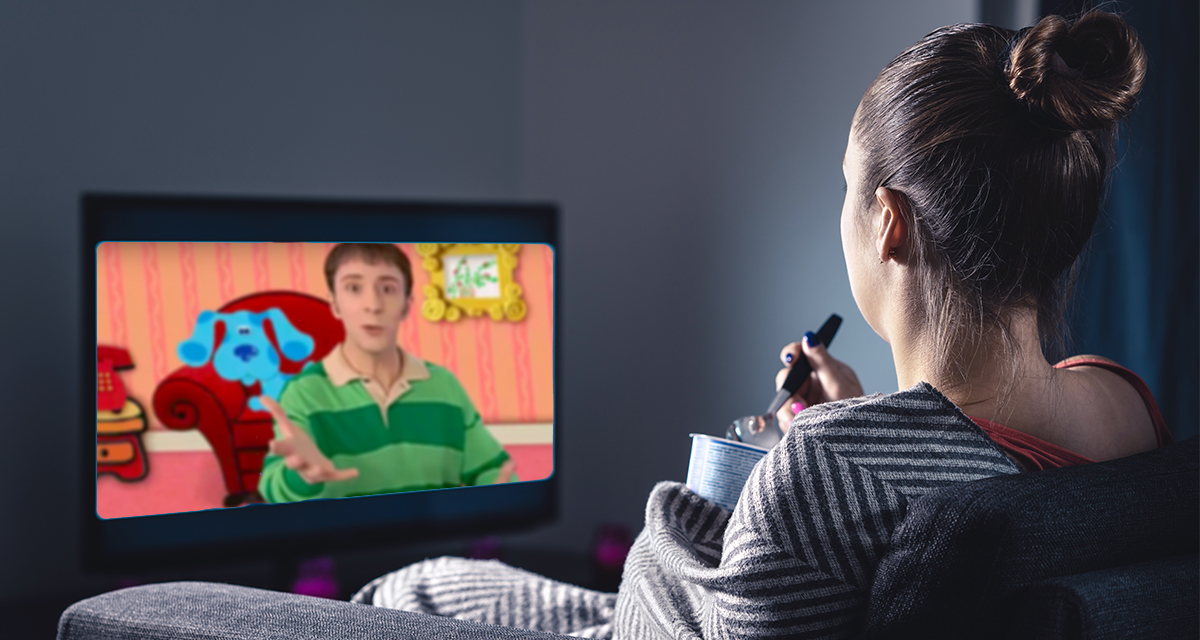 BLUEFIELD, W.V. — Local woman Erica Forster is currently on hour nine of watching 25 years’ worth of Blue’s Clues, following a viral video released by the show’s former host earlier today, according to sources.

“Everyone within a 10-year window of my age group is sharing these screenshots and memes of some guy named Steve saying very sweet things, apparently, and I want in, dammit,” Forster said. “Right now this video means nothing to me, so I’m gonna have to do what I do anytime a friend of mine has a kid and force a connection if I want to be included at all.”

Forster laid out a cut-and-dried plan to start and finish the show, which first aired in 1995, which she began executing when she awoke around 11:45 a.m.

“First thing’s first, I have a fuck ton of snacks ready to go and will be forgoing any bathroom breaks by not drinking water, ever, which I know from experience works,” she explained. ”I plan on fudging the numbers just a little by watching some compilations on YouTube, which should at least buy me one reference to get an early tweet out there. From there, I don’t see sunlight until this series is under my belt. I’ve got plenty of time and my neighbor’s very strong and not password-protected internet connection, and I don’t plan to stop until I feel something close to even one of the emojis expressed on my timeline. If you think I’ve got some important job or a family or even a dog to distract me from this, you’ve got the wrong bitch, brother.”

Those close to Forster’s report that she has displayed this type of behavior many times before.

“I thought the ‘Friends’ reunion situation was bad, but this is just worrisome,” said former roommate and longtime friend Danny Dodson. “I think most of her time is spent watching shows that aired three decades ago, just to be in on a conversation that will surely be over long before she finishes them. Also, I honestly don’t know what she’s been into for most of her life, since she doesn’t seem to know who anyone is or get any cultural references until someone related to those things either dies or gets in trouble for sexual assault. Either way, her reaction is always just ‘SMH’ with the prayer hands emoji, which is surprisingly effective in both scenarios.”

At press time, Forster was getting ahead of things by listening to every single piece of work in Iggy Pop’s catalog.