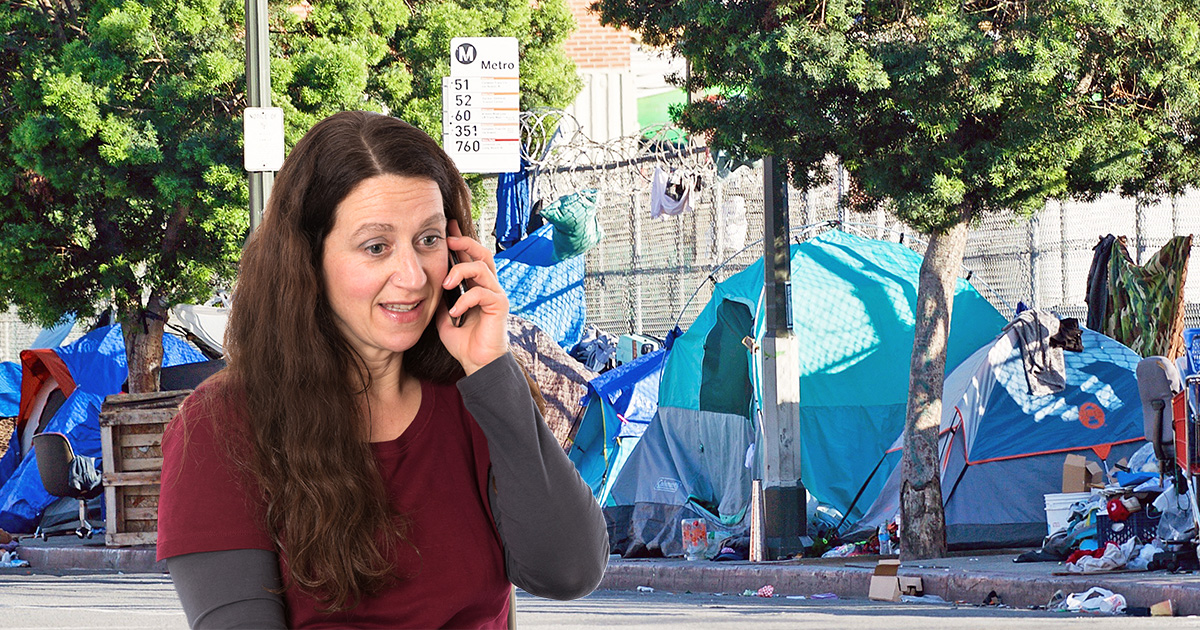 LOS ANGELES — Self-proclaimed activist Jane Lipton is in hot water with her community today after calling the cops on an unhoused neighbor for their inability to display an “In This House, We Believe” yard sign, multiple sources confirmed.

“An occupied tent near my house was alarming in and of itself, but I was even more distressed when I couldn’t find a single display of allyship. Like, for some reason, Black and Brown families are already moving out of this burgeoning neighborhood. It has so much potential, so the last thing we need is for a bigot to move in,” said Lipton, before throwing a “Resist” fist up at a Black family walking nearby. “As a white person, it’s my job to use my voice to tell the 9-1-1 operator about this man’s silence. Believe me, I read ‘White Fragility.’”

The victim of Lipton’s allyship, Sal Vasquez, became homeless after missing rent to pay for an emergency medical bill.

“First, I’m pitching this tent while trying to figure out how I’m going to pay off my appendectomy. Then, next thing I know, I’m getting harassed by cops saying that they got a call about a hate crime,” said Vasquez. “After they searched my belongings, one of the officers handed me a $500 ticket and a link to an Etsy shop. They told me that there’d better at least be a ‘Nevertheless, She Persisted’ embroidery hoop hung up when they came back, or I’d be breaking rocks at San Quentin for at least a decade.”

Susan Baker, the attributed creator of the “In This House, We Believe” sign, has since shown solidarity with Lipton and explained the story behind the sign.

“I was just scrolling through my Facebook feed when I saw an amazing graphic by an Indegenous artist I feel very deeply connected with. Minutes later, I was printing and putting it up on my lawn. Yes, I had to crop the original artist’s name off the bottom because of the poster board size, but it’s the message that matters,” said Baker. “And so far, I’ve gotten wonderful feedback from people like my new neighbor Kayleigh, who said it made our neighborhood feel instantly safer. So, now I’m proud to sell them to brave allies like Ms. Lipton. Fight on, girl!”

At press time, Lipton was unable to donate to Vasquez’s Gofundme to pay off his medical bill and recent ticket because she “literally just gave money to the Biden campaign.”