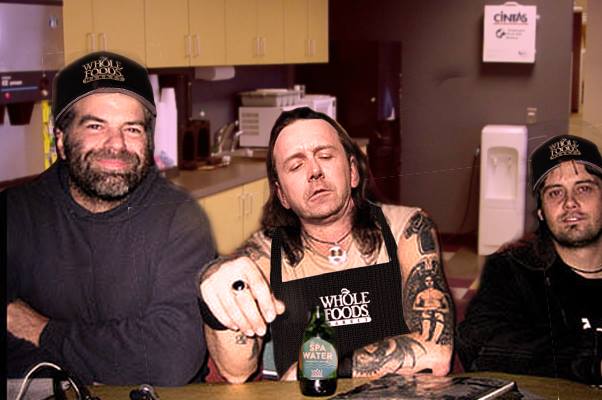 “I just finished up restocking the hot bar with this bomb-ass quinoa salad before heading to the back for a much-needed break,” said Whole Foods employee Diego Abreu. “Sure enough as soon as I open the door I see my old bass player Pete fucking Leibowitz. We haven’t talked in years but I guess he just started cashiering here after being fired from the post office.”

The two, along with Brandon Marconi (head pastry chef and part-time drummer) are all ex-members of Wretched Breath. The band broke up unceremoniously in 2007 citing “personal differences” on their official Myspace page.

“Then out of nowhere Brandon walks in. I had no idea he transferred to this store,” Abreu said of his former drummer. “We hadn’t talked in so long I figured he had moved to Portland like he’d always talked about. He put on a lot of weight so I hardly recognized him, but his terrible hand tattoos gave it away.”

Though all three work at the same Whole Foods location, sources close to the band say there is little chance of an official onstage reunion.

“I doubt they’ll be playing music together any time soon,” said mutual friend Kathleen Gallo. “Diego once told me that Pete urinated on Brandon’s tom-toms when he was drunk before a ‘gig.’ Is that what you call it? A ‘gig?’ Or is it a ‘concert?’ Either way — apparently they haven’t really talked outside of a few passive-aggressive Facebook and Instagram likes.”

When pressed for comment, Marconi had little to say about Leibowitz, his long-lost bandmate.

“Fuck that dude, with his tiny bladder there is no way he will last here,” Marconi said, before leaving to hose down the floor mat behind the deli counter. “Honestly, I will probably ask to work the early shift so I don’t have to see either of those dudes anymore.”

Update: Sources confirmed that another reunion, this time of militant straight edge band Honor Pledge in the security department, ended very poorly for a customer who “broke his word” in the dairy aisle.