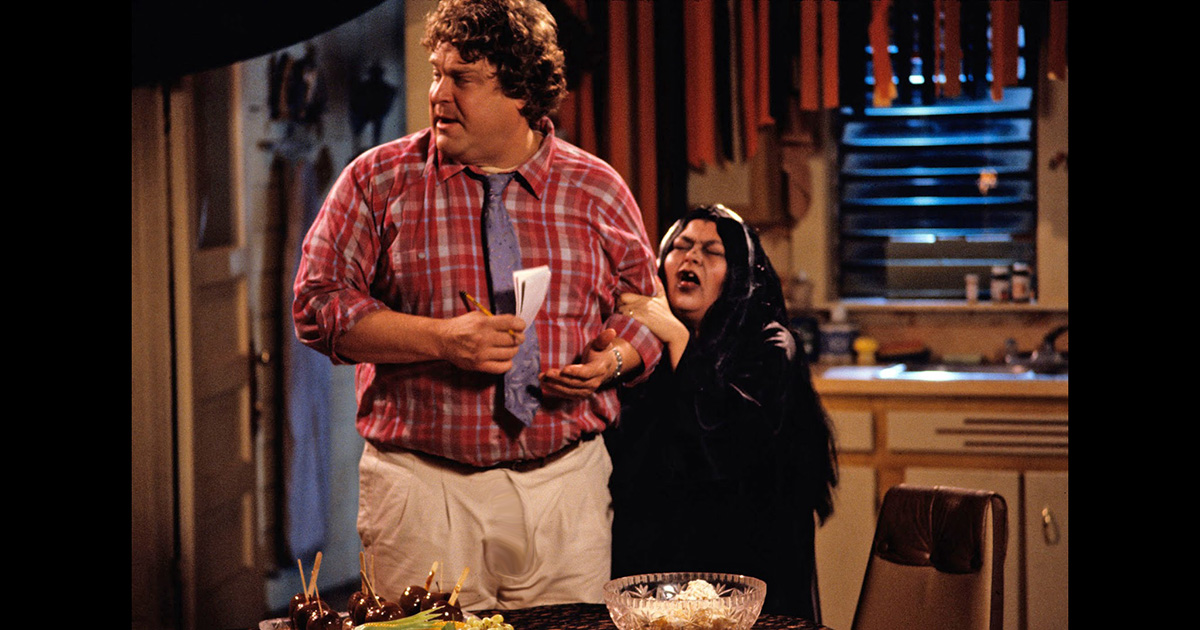 In 1988, the Conners showed the world that raising children in a lower middle class home had its ups and downs, while still keeping us laughing even as they tackled serious issues. But 1988 was 33 years ago. Does “Roseanne” still hold up today? That’s why we set out to rewatch “Roseanne” from start to finish.

And although the show was pretty great, and I greatly enjoyed spending time again with my favorite TV parents (Roseanne Barr and John Goodman), I found it difficult to enjoy the show after a particularly revealing episode made it abundantly clear Goodman is packing a massive, 9-inch hog.

I suppose I just never thought about these things as a kid. But now as an adult, I must address the elephant in the room that is the elephant trunk in John Goodman’s pants.

By the time I made it to the 2018 revival I wasn’t even paying attention. My face buried in my phone, Googling “John Goodman horsedick.“ How did I miss this? Goodman had a sixth member of the Conner family right there dangling in our faces the whole time. But while I expected to find tons of articles and message boards devoted to his obviously 9-inch penis, there were none.

I had to know more, but the only clue I unearthed was from a crew member from “The Flintstones” (1994). All I could get out of him was, “Let it go man. It goes deeper than you can imagine.” I’m not sure if this means there’s some sort of great conspiracy to conceal the “Coyote Ugly” star’s abnormal knob or was just a joke about getting your holes filled by the portly actor’s Big Lebowski. For my own sanity, I decided to just let it go.

So, while I wish I could still view “Roseanne” through the innocent eyes of a child, the entire run is marred by the knowledge that Goodman probably wasn’t allowed to wear shorts around the children on the set. Now rewatching “Monsters Inc.” will never be the same.