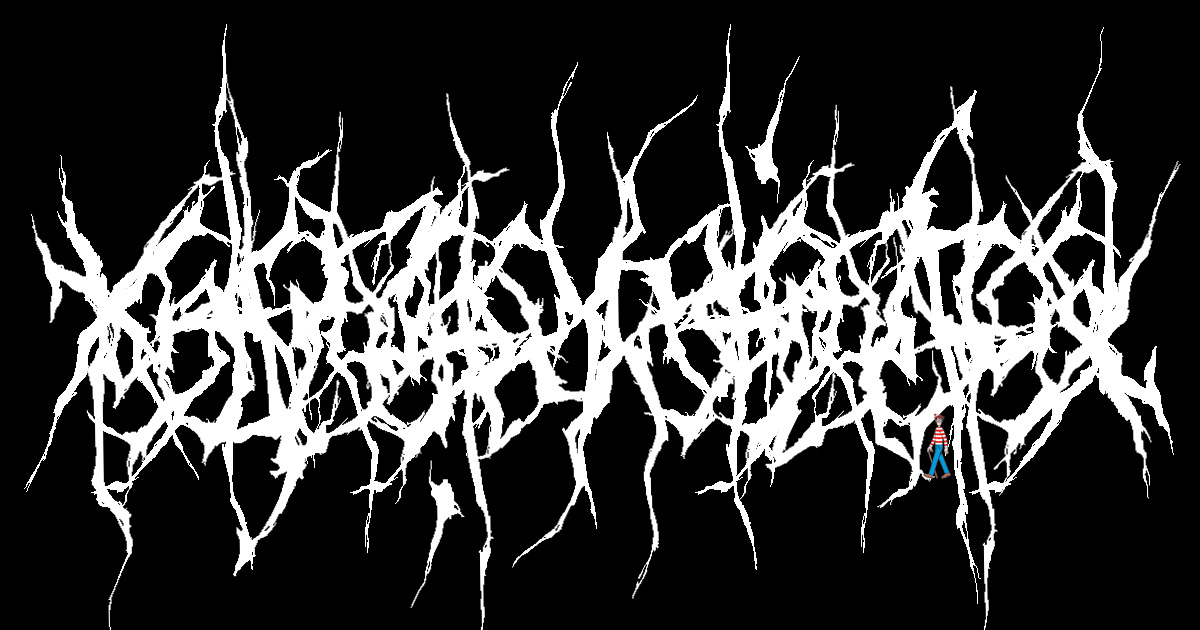 DENTON, Texas — Children’s literature icon Waldo was found yesterday within a local black metal band logo after nearly 30 minutes of attempting to understand what the band’s actual name is.

“I got this free sticker at a show a few months back, and was trying to decipher what it said to see if I wanted to put it on my girlfriend’s car,” reported local scenester Mateo Rodriguez. “After about 25 minutes, I noticed this little, bespectacled dude looking like some kind of Antifa ‘Blue’s Clues’ host hiding behind a T, or maybe a B. It could have been a goat head, for all I know — I’m still trying to figure it out.”

“I always got kind of a Swedish vibe or something from Waldo when I was a kid,” he added, “so I guess this sort of makes sense to find him in there.”

The iconic cartoon person, who fell out of the public spotlight thanks to multiple charges of public nudity in some of his best-selling books, has since been hiding in less obvious spaces.

“Now that I’m not expected to sell kids’ books, I’ve been hiding in all kinds of cool places lately. Metal band logos are new to me, so that’s been fun to explore, since there are all sorts of tangles to get lost in and pointy letters to climb up and down,” said rogue children’s literature icon Waldo. “I hung out in some anarchist pamphlets for a while, too, but they kept confusing me for Emma Goldman, so I’ve kept it moving. I think it’s the glasses.”

Waldo creator Martin Handford confirmed that the well-known wanderer has departed from his traditional settings, and is exploring a shift in his image.

“As individuals, we have room to evolve how we express ourselves, and as someone with a wanderer’s spirit, Waldo will never stop moving, despite his sartorial choices,” said Handford. “Those red-and-white stripes represented childhood innocence threading into the narrative of society’s chaos. These days, Waldo is exploring an ensemble of various shades of black, as a metaphor for the human desire to escape into the background of our own narrative. It certainly has nothing to do with an error caused by my cat walking on the keyboard while I was ordering ink online.”

Waldo and his dog, Woof, were last seen trying to hop on a moving train on a unicycle while lugging a Crosley record player and a Days N’ Daze vinyl album.