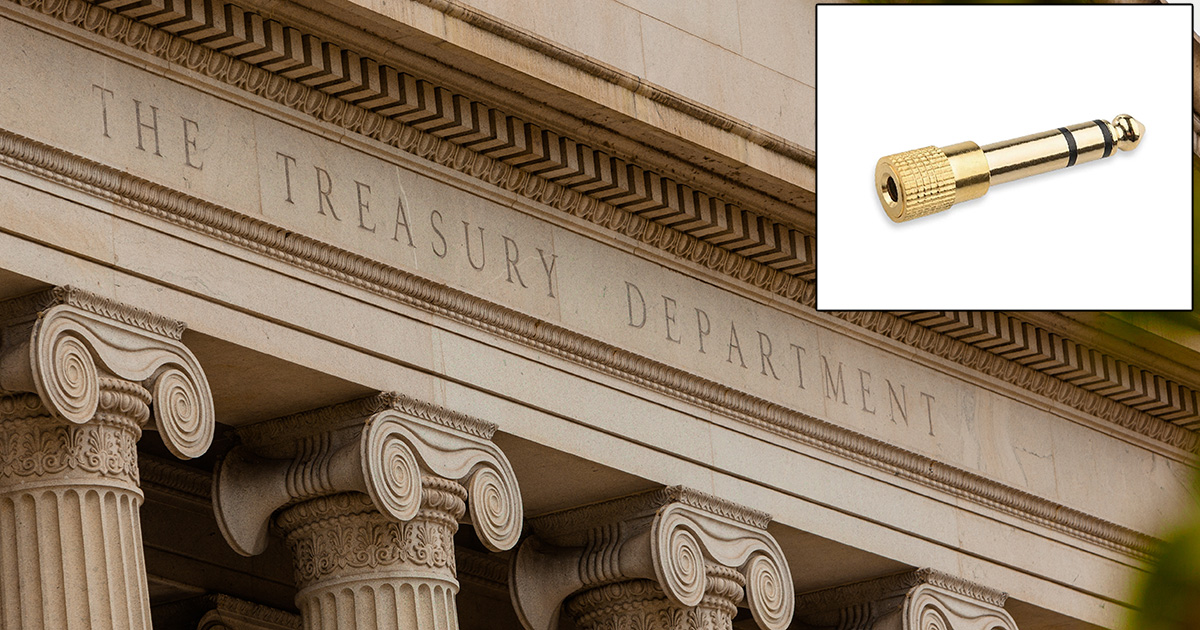 WASHINGTON — The United States Treasury announced they will introduce another round of ⅛” to ¼” adaptors into public circulation for the first time in nearly twenty years, the decision comes after weeks of public pressure from congress and the president to provide these resources.

“Releasing these small but important and highly valuable pieces of gear into circulation is not an action we take lightly,” said US Secretary of the Treasury Janet Yellen while promptly dropping one of the adapters and losing it under a couch. “But the fact remains that millions of musicians, hard-working American musicians, are in need and the U.S. Government needs to take drastic measures to help alleviate their suffering. Yet we recognize that any increase in available adapters will decrease their value. Therefore we will only release a conservative total of 15 adaptors, thus raising the total amount of publicly available adaptors to 47.”

Struggling musicians from across the country celebrated the announcement and expressed their sense of relief.

“We really, really needed this,” said guitarist and producer Norman Riggs. “This pandemic hasn’t stopped me from working on new beats, but I haven’t been able to hear a single thing I’ve worked on for ages. My recording interface only has a quarter inch jack and this dude ran off with my adaptor two years ago, so I’ve just been lining things up based on waveforms and hoping for the best. I’m just stoked to hear my last four albums for the first time.”

Still, some working musicians felt disappointed and even angered by the decision.

“What are people like me who have invested serious money into these adaptors supposed to do?” asked self-proclaimed musical entrepreneur and content creator Joel Leonard. “I spent years building my portfolio of adaptors to where it is now: three adaptors, ready to go. The treasury just decided to completely torpedo that investment. I’m pretty sure promoters will stop adding me to bills just because they know I’m the only one in town with enough adaptors to share.”

“Guess I’ll just have to focus my energy on the practice space I run,” added Leonard.

Although the treasury does have intentions to circulate more adaptors, Yellen announced they had no intention of increasing the number of publicly available tuners or drummers anytime soon.