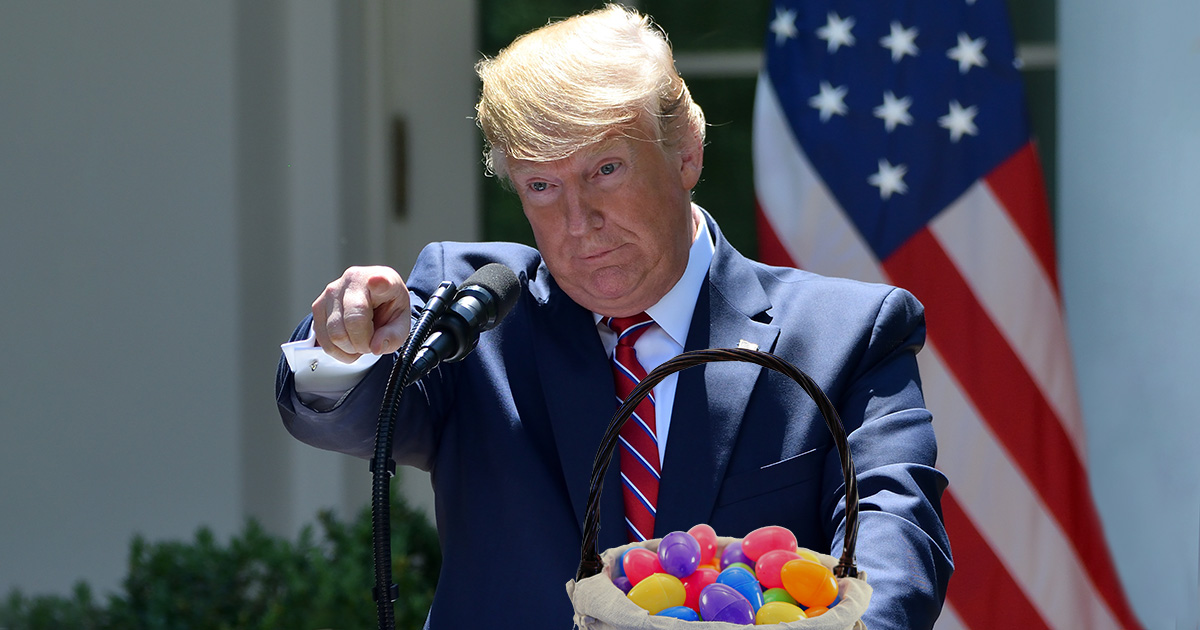 “First off, I just want to thank all of the kids that came out today on this momentous day of the birth of Jesus. Sure, they couldn’t find an egg to save their lives, but thankfully I was here to find the eggs — all the eggs, even a big gold egg that had a Reese’s Big Cup inside,” said Trump at a post-event debrief. “I’m one of the world’s best egg hunters, everyone knows this. This event was perfect — just like the transcripts, another perfect day for me. Next year — and there will be a next year — I just hope they bring in kids who can actually challenge me. I’m going to get a stomach ache eating all this candy.”

However, children claimed the President gained the upper hand deceitfully.

“It was like, kind of like, hard, because there were like these big men standing next to the eggs… and every time I got near one, they’d block me from grabbing it. One guy even stepped on my hand and it hurt so bad I thought it was going to fall off,” said five-year-old Skyler Dodge. “Another time, I almost had an egg in my basket when Mr. Trump came out of nowhere and knocked me down and took the egg. It’s not fair. I want to go home.”

For their part, Trump supporters applauded the President for his impressive egg hunting display.

“This just proves that Trump is a man that gets things done. I don’t remember seeing Obama or Clinton finding any eggs — they had these kids running circles around them, and it’s no wonder this country went to shit,” said local parent Kenny Dubornay while sporting a MAGA hat and shirt. “I saw a lot of kids on the news crying because Trump ‘stole all the eggs.’ Well, that’s life, kid: you don’t just get everything handed to you. Try working harder, and stop feeling so entitled to government candy.”

At press time, Trump was attempting to break his own personal record of fitting 11 Cadbury Eggs in his mouth at once.