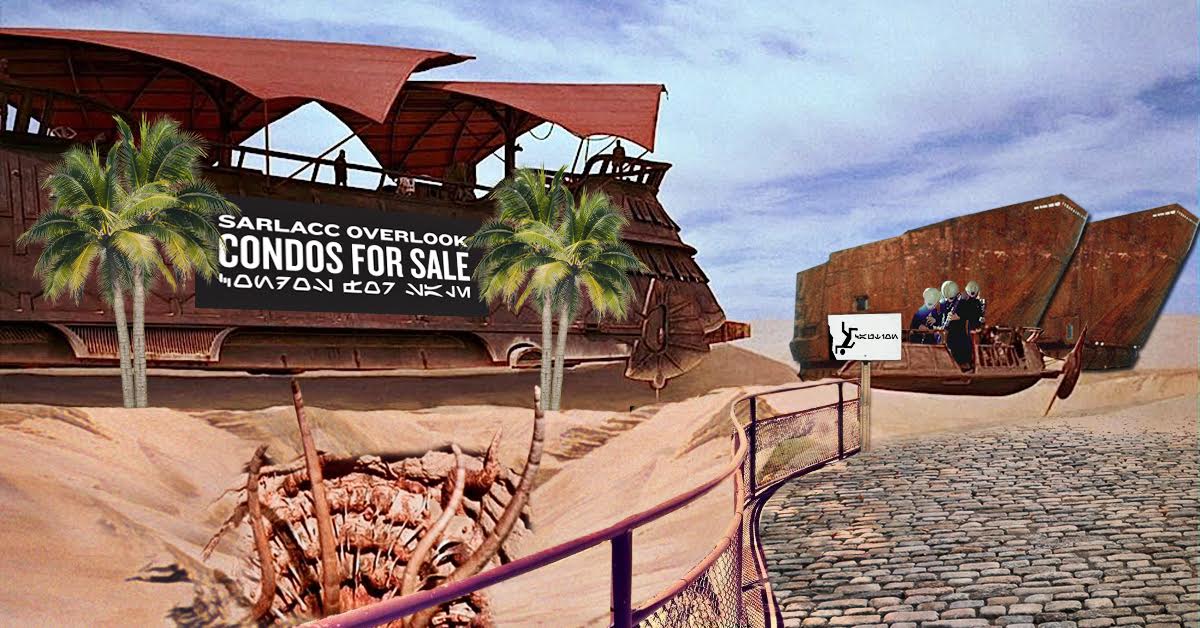 MOS EISLEY, Tatooine — Brutal, untamed pits are held as a hallmark of any worthwhile scene. But  according to one part-time bartender of a local cantina popular with road-weary freight pilots, things are going “seriously downhill” at the Great Pit of Carkoon.

“Man, that place used to be fucking wild. Once I saw Max Rebo play there, and you’ve never seen a crazier pit. Dudes couldn’t even step foot without tentacles wrapping around their ankles and dragging them to their deaths,” said Gleg “Skidmark” Ropu as he wiped down the bar. “I mean, sure — it hasn’t changed entirely, since a lot of them are still there slowly being digested, but it just doesn’t feel the same.”

According to Ropu, changes at the infamous sarlacc pit are indicative of larger trends on Tatooine, especially Mos Eisley — a city once famously described as a “wretched hive of scum and villainy.” From the renovation of Jabba’s palace into luxury condos, to the transforming of sandcrawlers into Starbnb rentals by Jawas, Tatooine punks claim gentrification is robbing them of the spaces they once held dear.

“A lot of these problems started when the Alliance overthrew the Empire. I’m not saying Palpatine was a good guy, okay? But things were real back then. Now, it feels like the whole planet is selling out,” said Ropu.

Ropu’s complaints echo those common among Tatooine punks, who frequently romanticize the “glory days” while glossing over the darker aspects of that period, such as widespread slavery and an anti-droid prejudice that prevented droids from being served at the very same cantina at which Ropu works.

“My place used to be one of the craziest clubs in the quadrant,” claimed Ropu. “Figrin D’an used to play here all the time, and almost every night, insane shit would happen. Wolf-looking dudes with glowing eyes, Jedis chopping off arms,” said Ropu, showing off an arm bone stored under the bar. “Once, I saw some guy get shot under a table and Figrin didn’t even stop playing. Now, D’an has a datacard of Life Day songs he sells down at the spaceport tourist shop.”

The changes have left Ropu and many like him doubting their future on Tatooine. “I had some good times here, but let’s face it… this scene is dead,” he said. “My cousin on Kashyyyk says the house shows there are amazing. Soon as I’ve saved up enough money for a ticket on a shuttle, I’m outta here.”