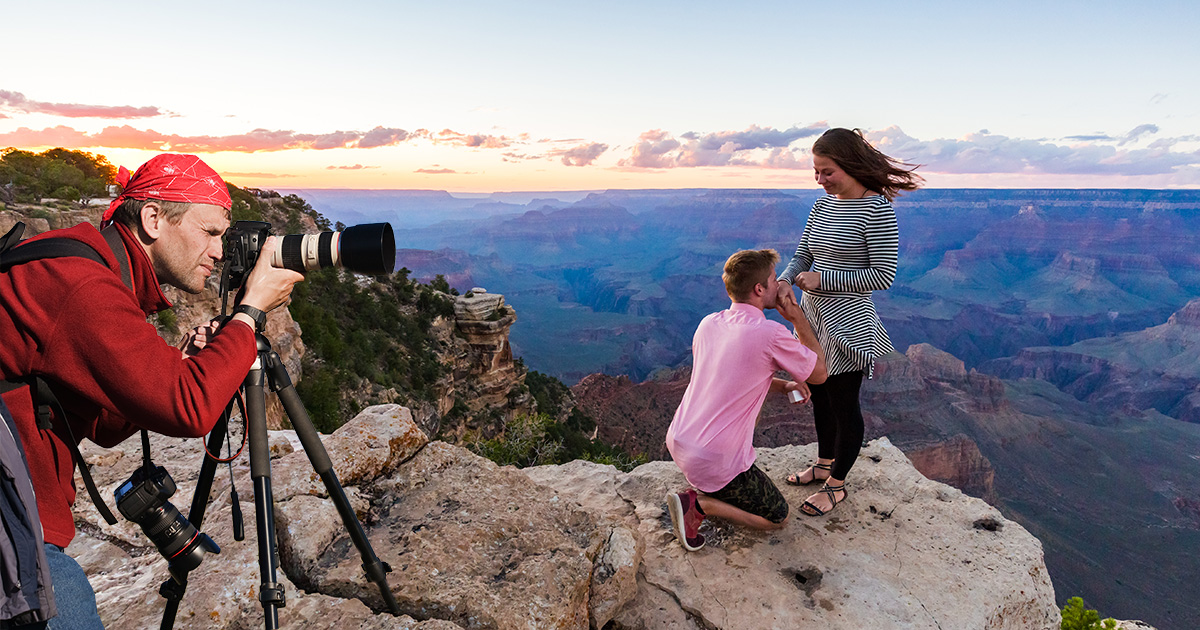 GRAND CANYON VILLAGE, Ariz. — Amateur photographer Jim Wagner agreed to photograph a couple who recently became engaged yesterday if, and only if, they tag his Instagram account for credit when they post the photo online, annoyed sources confirm.

“My fiancé wanted to show off her new engagement ring, so I asked some guy carrying a tripod with four different cameras around his neck to take our photo in front of the canyon. He immediately gave me his handwritten business card that read, ‘World’s Best Photo Expert’ and demanded we credit him on Instagram for his hard work,” said husband-to-be Ryan Strauss. “Clearly, something was off — he went on and on about how tourists always take advantage of his talents, and after 15 minutes of him ranting about how so many people have stolen his work, he finally took one blurry photo of us before moving on to another unlucky group.”

Wagner lamented the notion that he’s “pestering” tourists for credit on Instagram.

“I get the lighting just right in every shot and make your girlfriend hotter, and yet, I’m a bother? It’s like people don’t know my skills are the reason they get likes. Not to brag, but I do have over 200 followers, so I know what I’m doing,” Wagner remarked. “I could be charging a high premium for these photos if they came to the studio I have in my parent’s garage, but I don’t charge any money — just the credit I deserve.”

Sarah O’Connor of DePaul University’s Center for New Media Studies noted this is not an isolated incident.

“Amateur photographers worldwide are pressuring tourists to tag their accounts whenever they post a photo taken by them online. Tourist destinations attract these Instagram fanatics, making it difficult for authorities to keep them away,” she said. “French authorities are called on @HarrisofParis regularly for hiding out under the Eiffel Tower, and San Francisco addressed a similar issue with @GoldenGateNate, though he can still be seen around the Golden Gate National Recreation Area. We strongly urge caution around these photographers: do not engage them if at all possible. In pursuit of credit, they can become very aggressive.”

At press time, @SouthRimJim agreed to babysit a friend’s newborn with the expectation he would be named the baby’s Godfather.