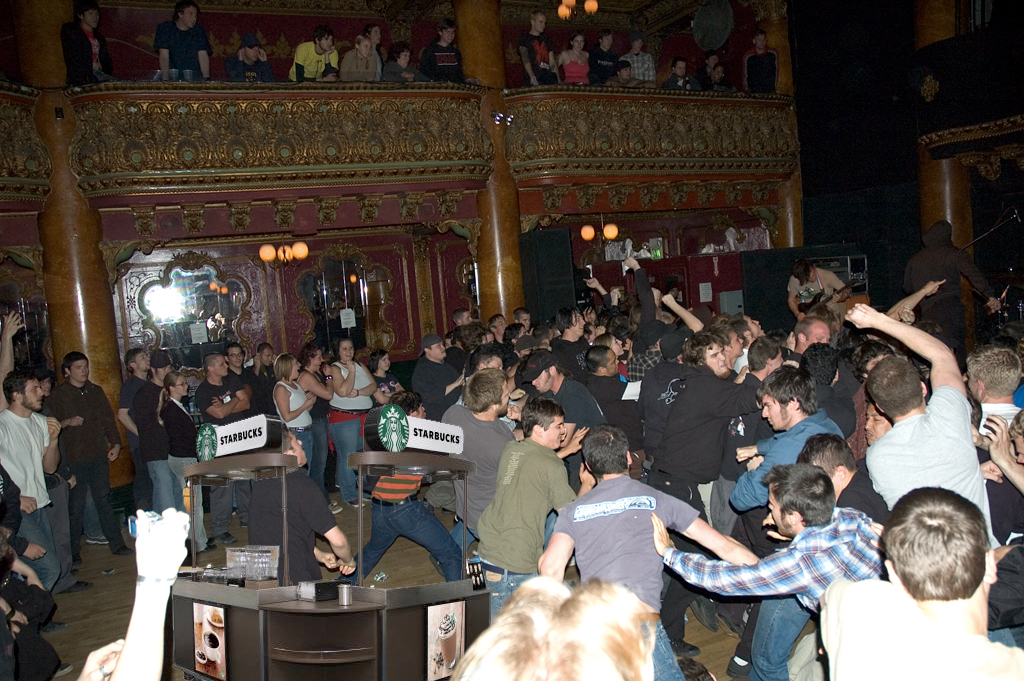 Starbucks CEO Howard Schultz made the announcement earlier today, “We have heard the calls and we have responded. Starbucks wants to provide easy access to coffee lovers everywhere, and this new location makes it convenient for some of the most opinionated coffee drinkers out there.”

The new location has been met with mixed reviews.

“I love this place,” 48-year-old dog groomer and neighborhood resident Janet Perkins said. “The location is less than two minutes from my apartment. The only problem is the music is so loud that it is hard to order, and everyone surrounding the place looks like they are practicing for a fight.”

Some attendees of the show felt the new Starbucks location is actually a hazard.

“Every time someone orders a coffee, it ends up getting smashed out of their hands. My thighs have been scalded by coffee three or four times already and we haven’t even made it to the headliner, and now the floor is sticky as fuck” Ricky Masterson, a long time patron of the Phoenix Theater, said.

This is not the first time Starbucks has opened a location in a non-traditional setting. The coffee giant made headlines when it announced plans to open up a “Stealth Starbucks” inside of a dead whale that had washed onto the shore of a beach in Pacifica, Calif. The plans were scrapped when toxic gasses were found filling up the whale during the natural decomposition process.

Only time will tell if the experiment will pay off, but many within the hardcore community hope people are considerate of the location and its employees.

Daniel Morgan, vocalist of the opening act ClearlyxStraight, had some choice words for the crowd. “Whether you are straightedge, or a coffee-head or whatever. Just respect the space, man. We are all a community here. Tip generously. This one goes out to the barista.”