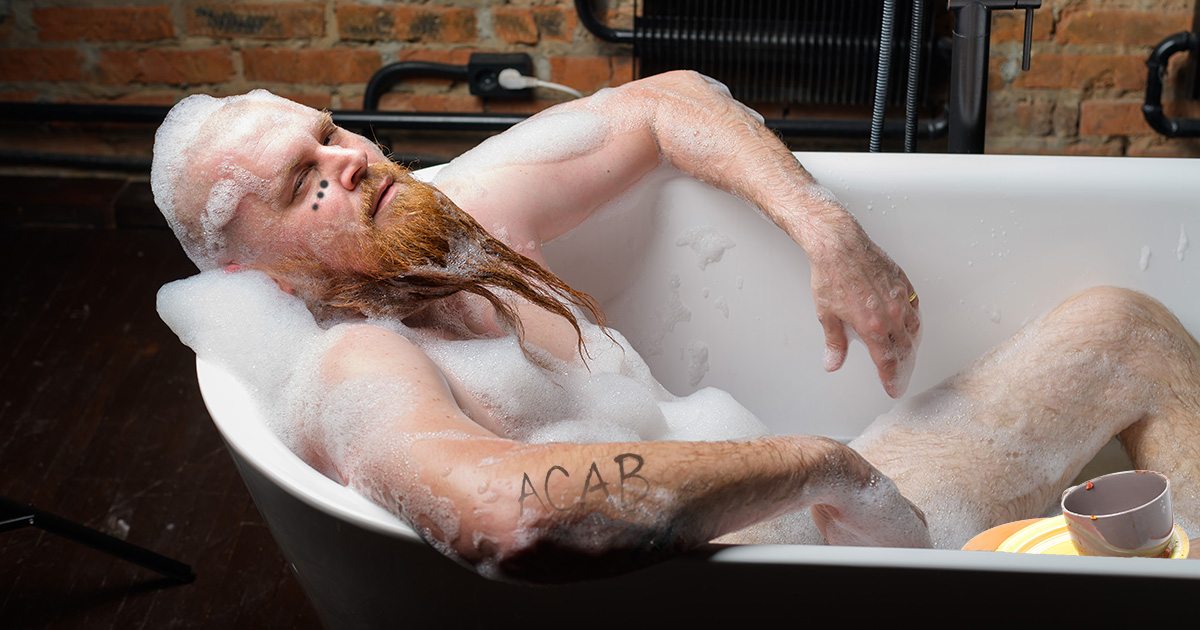 WILMINGTON, Del. — Local woman Lily-Ann Greenaway is allowing a crust punk she met last week on a dating app to soak “for a day or two” before eventually cleaning him, incredulous roommates confirmed.

“I met this crustie on Hinge. He seemed cool, and I wanted him to come back home with me… but once we started fooling around, it became abundantly clear he was going to need a good cleaning before we go any further,” said Greenaway. “We moved to the shower, but he was covered in grease stains and stuck-on food, so I just kept scrubbing him until I broke skin. At that point, I filled the tub with warm, soapy water and told him to soak for a while and I’d check back later. That was three days ago.”

Roommate Kyle Jernigan has grown accustomed to the pruned punk in his bathtub.

“That guy is pretty cool, actually. We got off to a rocky start when I went to take a leak in the tub and unwittingly pissed in his face, but since then we’ve been getting along swimmingly,” said Jernigan. “Still, Lily better not be hoping one of us takes care of him. This isn’t going to be like that chili bowl from last month — three days in a bathtub with dish soap is more than enough to loosen the chicken breast stuck to that crustie’s forehead.”

Despite Greenaway’s insistence to the contrary, experts agree that allowing punks to soak is not an effective cleaning method.

“The fact is, leaving a crust punk in water for a few days to remove those stubborn malt liquor stains and the burnt-on kush residue is simply a myth,” explained blogger Sharita Booker. “You only need two things to clean a crust punk: steel wool and elbow grease. And if that fails, try soaking his stained parts in Coca-Cola overnight, then scrub him down with baking soda. That’s an old trick from my Mamaw, who was no stranger to bringing home a hobo or two, as they used to be called.”

As of this morning, the crust punk was deemed “more trouble than it’s worth” and tossed out with the recycling.