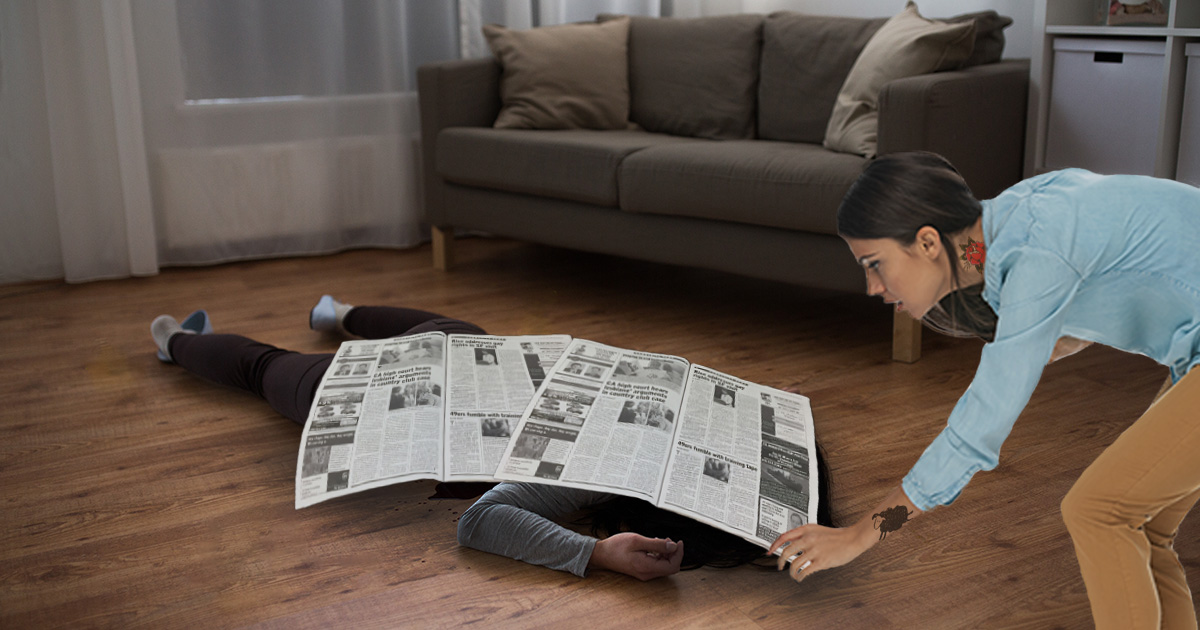 “Fucking just like Vince to have me clean up after him. I swear this is the last goddamn time,” an exasperated Flores said, while placing pages from the sports section over the decaying body. “This whole process is a pain in my ass, but I figure this should solve the problem for now. I’ll figure out cleaning it up later, I’ve got a Call of Duty game going. At least this paper will keep people from noticing it. I’ll get to it before the basement show we’re doing, or will at least be sure to sprinkle some of that baking soda stuff we use for the litter box over it if I have time.”

“I’m probably going to have to rent a carpet shampooer or something. That asshole’s paying me back,” Flores added.

Anonymous sources report that the now partially fly-eaten carcass has been sitting there for several days.

“It seems as though the lazy motherfuckers in this house are under the impression that if they just leave a mess around long enough, I’ll eventually get sick of it and clean it myself. Well not anymore,” noted surviving housemate, Cayla Fowler. “I think the dog’s been kind of picking at it, and the flies have definitely gotten a lot of the meat off, but Tyrar’s got to do more than just throw the paper over it. I’ve lost count of how many times I’ve emphasized keeping the common areas clean. I’d deal with this myself, but if I don’t put my foot down now, they’re going to just keep taking advantage of me.”

Housing experts note that the monotony of housework often leads to procrastination behaviors such as Flores’s.

“With dead bodies, and maybe this is just me, but I find it’s better not to put off cleaning them. As rigor mortis sets in and the bowels release, cleaning only becomes more difficult,” noted housekeeping expert Martha Stewart. “In a case like this, the fact there is no blood makes clean-up a breeze, just spray the area with a little vinegar and lemon juice and it’s like new. One thing she could do is to put the front page of the newspaper over the body, so she’s reminded how long it’s been sitting there.”

As of press time, Flores had typed, but forgotten to send, a reply to Russo’s relatives asking if she had seen or heard from their son.