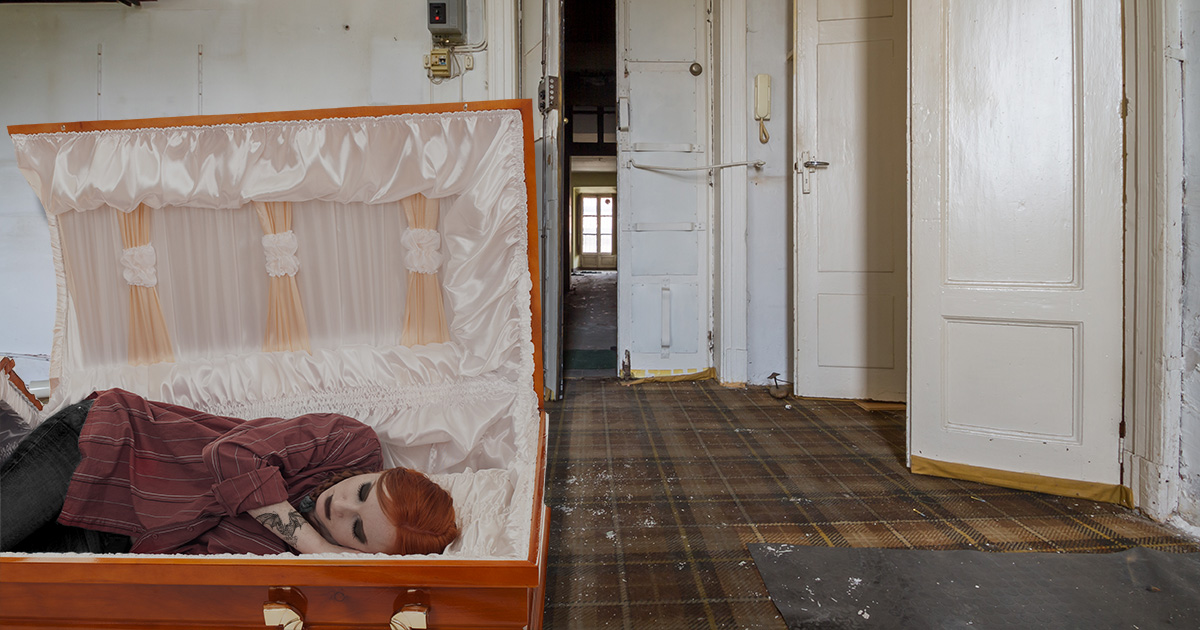 SYRACUSE, N.Y. – Local goth Sarah Lashley is rejecting modern bedding options and instead chooses to sleep in a casket resting on the floor, confirmed creeped out roommates.

“Sure, the thing doesn’t quite have a proper base and I know that’s a faux pas in the eyes of a lot of people,” said Lashley as she was popping in a pair of fangs. “I can’t really afford an expensive coffin base right now, it’s not like Ikea has many options for that sort of thing, and you never find one just sitting on the street. But overall this thing is amazing, when living in a house with eight punks, the option to be able to seal the lid of my bed proves useful at keeping vomit and random people fucking out of it. Not to mention the NASA-quality material the interior is made from really has given me some of the best sleep I’ve ever had! Now I really understand why dead people look so peaceful.”

Sam “Scuzz” Fallon, the most tenured resident of the punk house, has his qualms with the coffin.

“First of all, the goddamn thing is creepy. She’s always bragging that she got a great deal on it because she bought it used, which makes it way worse,” said Scuzz while cracking open a 40oz. “And that fucker is massive. She moved into a bigger room upstairs last month and it took six people to move the damn thing. It didn’t help that she insisted to lay inside it while we carried that fucker up the stairs.

Local casket salesman Warren Winkleman says the “imaginative goth” market is something he hopes to tap into even more.

“Of course the casket business is very lucrative because everyone dies,” said Winkelman. “But we have been seeing steady sales growth with very alive individuals wearing lots of makeup looking for a stylish and comfortable place to lay their head at night. To tell you the truth, it’s a refreshing change of pace to have people buying these from us to use on a daily basis, as opposed to laying in it for the rest of time not fully appreciating the craft and comfort one gets laying in a coffin.”

At press time, neighbors living next to the house reported a mysterious priest holding a wooden stake approaching the front door.