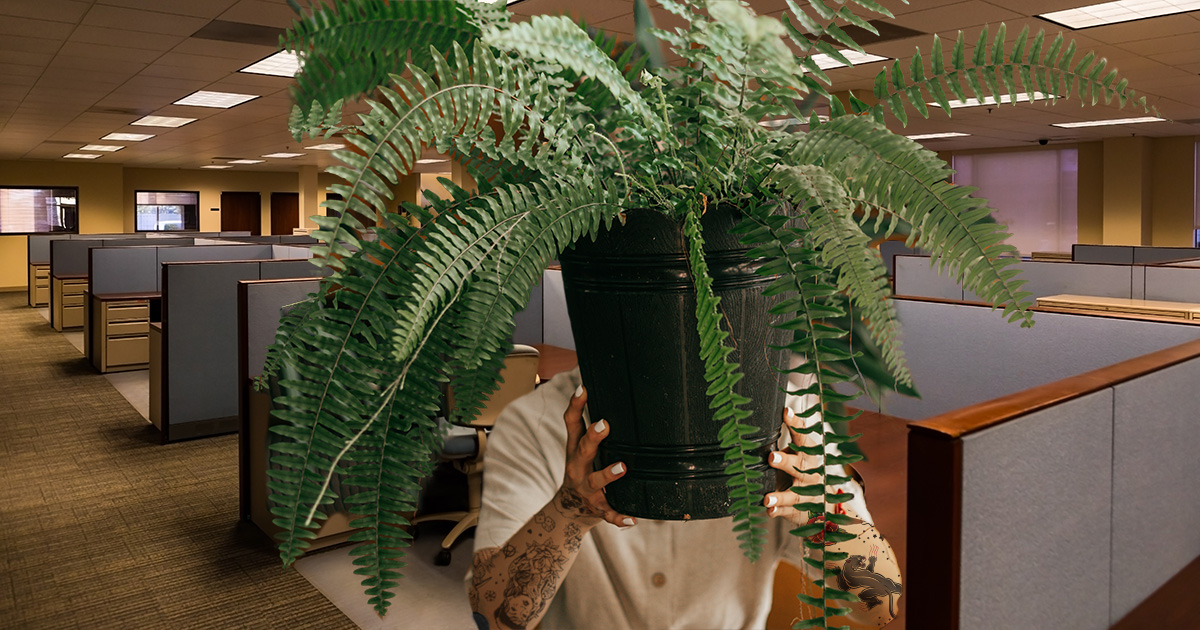 PHILADELPHIA — Local punk and office employee Devon Smith successfully hid his tattoos at work by carrying around a huge Boston fern everywhere he goes for the 112th consecutive week, according to confused sources.

“I finally sold out, and now I’m working at an office. Unfortunately, it’s not a bitcoin company or anything cool, so I’ve got to hide my tattoos just to be taken seriously,” Smith stated. “Most people think the only way to do that is to wear long sleeves constantly, but that’s a rookie move. That’s why my first day I walked in with a Boston fern and never looked back. Its graceful long fronds and supple pinnate vein patterns perfectly obscure my neck piece, plus, carrying this giant ass pot around really helped me tone up my core, which is super important if you’re sitting at a desk all day.”

Coworkers are generally supportive of Smith’s decision, once they understand it.

“I never knew why he did it, but I guess that makes sense,” said Susan Thomas, a coworker. “I know some people thought it was an anti-mask thing, or maybe the plant was like, for oxygen or something. I don’t actually know how plants work to make air better. Anyway, he’s been here over two years and no one has really seen his face, so we’ve mostly just all been debating whether he’s hot or not. I’m guessing yes based on forearm definition, but who the fuck knows.”

The fern itself seems to be enjoying the arrangement.

“I’m just happy to get out of [Dev’s] apartment. I’m the only plant there and it’s lonely. Here at the office, there’s me, a few Spider Plants, and this guy Mark who hardly moves,” the fern stated. “Plus, I’m learning so much about the international and regional market for water-resistant patio furniture, which might be useful if I’m ever looking for a different line of work. You never know. I feel like twice the fern I used to be.”

As of press time, Smith’s supervisor could not be reached for comment and was reportedly ‘out of the office’, though a particularly lush, five-foot-eight Fiddle Leaf Fig with hands was seen leaving the building early.