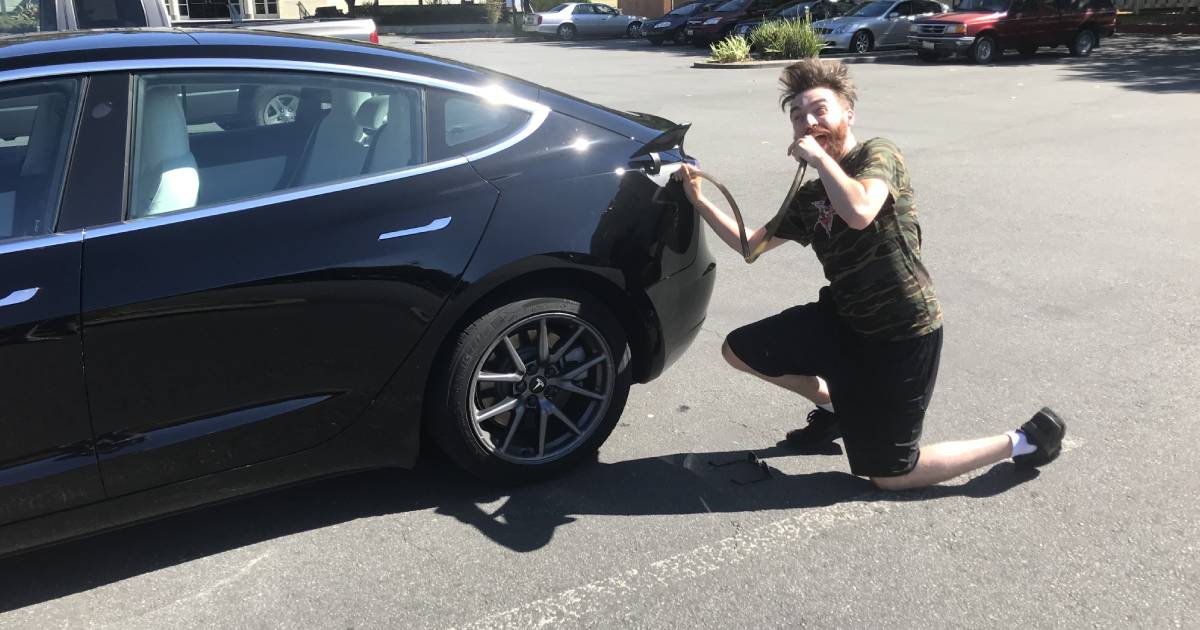 “With the economy going to hell in a handbasket, my side hustle of dancing jigs for spare change outside the 7-Eleven has really started to dry up — and with my band about to hit the road, I needed to siphon some gas. So, I found this yuppie schmuck doctor parked outside the hospital driving something called a ‘Tesla,’ and went to work,” said Bettina. “Everything was going great until my arm went numb and the metal fillings in my mouth melted. I didn’t even know they made electric cars.”

Parking lot attendant Tamas Hovik was the only witness to the incredibly violent incident.

“I saw him tiptoeing over to the Tesla with a pack of Altoids and a small length of garden hose. I thought, ‘He’s not that dumb, is he?’ And yeah, I could’ve stopped him, but I really wanted to see how it’d play out,” said Hovik. “I know it’s stupid, but I assumed getting electrocuted would be comical — like the time Al Bundy touched the broken Christmas lights, or some Looney Tunes type of shit. Maybe his hair would stand up and we’d see his skeleton, you know? But TV and movies really didn’t prepare me for all the extreme defecation and bleeding from the eyes and ears.”

Bettina’s friend Simone Potenza visited him in the hospital, and was surprised by Bettina’s seeming lack of remorse or understanding of the seriousness of the situation.

“I was telling him how lucky he was to be alive. But he just kept asking me to place my keys on his face to see if he had ‘magnet super powers,’” Potenza stated. “When I refused, he started pointing at me menacingly like he was trying to shoot lightning from his fingertips and kept insisting that I call him ‘Powder’ from now on.”

Immediately after being released from the hospital, Bettina accidentally trapped himself inside an automated, driverless car for nearly 22 hours following a failed carjacking attempt.