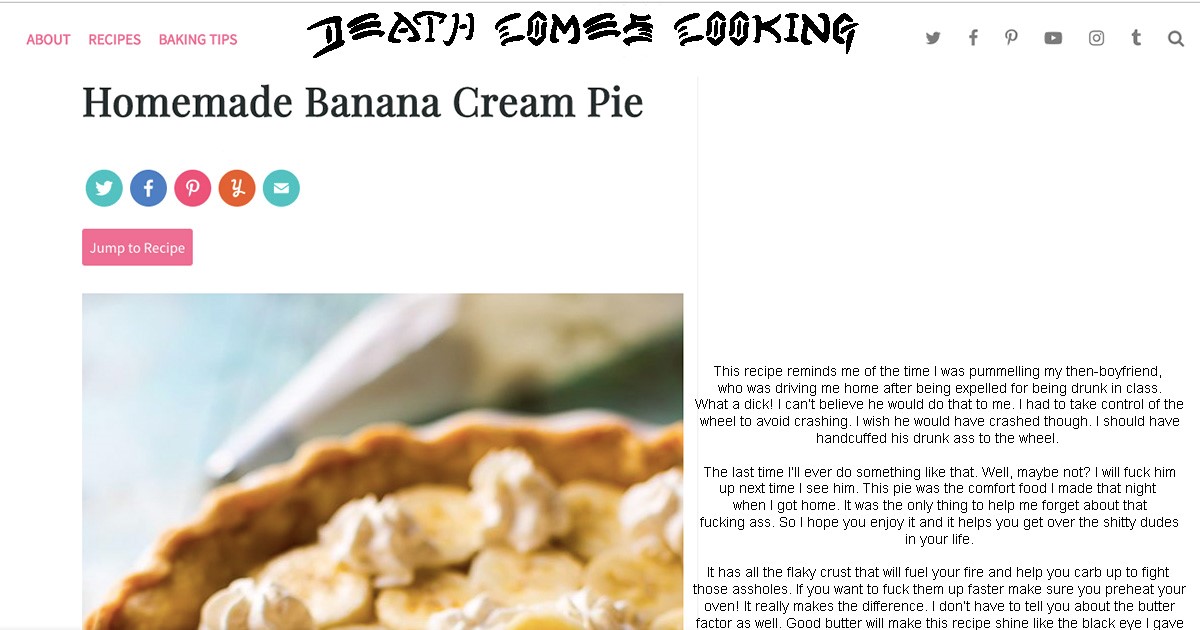 BALTIMORE — New cooking website Death Comes Cooking will offer readers a refreshing take on the usual recipe/blog formula by beginning each entry with a long, intoxicated fight story, instead of “some WASP-y memoir horseshit,” according to the site’s founders.

“I couldn’t scroll past one more normie’s tale of summers at her aunt’s cabin off the coast of Maine before getting to the goddamned crème brûlée ingredient list,” declared site founder and punk scene veteran Sonia DiBarrio. “There was no edge; no blood. How can I trust you truly care about properly filling your ramekins if you haven’t tried to burn your best friend with a hot curling iron while crushing Natty Boh sixers?”

In one of the site’s best examples, DiBarrio’s “banana cream pie” post is prefaced with her account of pummelling her then-boyfriend, who was driving her home after she was expelled for being drunk in class. Unfortunately, some readers seem frustrated and confused by the format.

“I don’t even know. It went on and on for like, 600 words about being blackout drunk at 8 a.m. and puking on the side of the road outside Royal Farms and fighting with a cashier, somehow?” recalled reader Jess Alvarez. “But I’m not about to go buy a cookbook like some pilgrim or something. Once I finally got to it, the recipe wasn’t bad… the drop of almond oil really was a nice touch.”

In building readership, those behind Death Comes Cooking hope to branch out with a wider variety of recipes and violent recollections.

“Sonia hired me because I know some excellent barbecue techniques passed down from my grandfather,” said guest columnist and bandless rhythm guitarist Troy Becker, “and because I have a laundry list of alcohol-fueled aggravated assault charges that should provide some nice balance on the site. People don’t come to cooking sites just to learn how to cook — they come to learn how to cook, and learn how easy it is to get ringworm on tour.”

At press time, DiBarrio was filming a 22 minute-long YouTube video for a pepperoni roll recipe, opened by a 19-minute reenactment of the time she punched a dog in the face while on PCP.