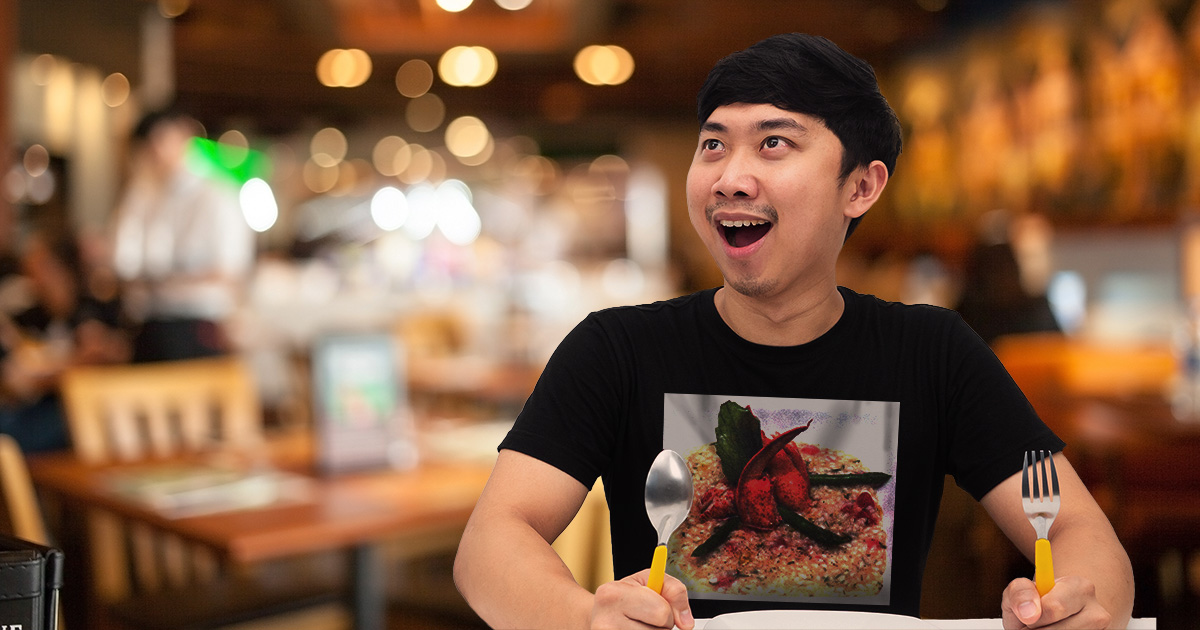 PORTLAND, Ore. — Local man Terry Miller became the target of derision and mockery from patrons at upscale eatery Stem when he showed up wearing a shirt of the dish he planned to eat that night, several repulsed restaurant staff confirmed.

“I’ve been a follower of lobster risotto for years. I’m over the moon that I finally get to eat it in person,” exclaimed Miller. “I can’t tell you how many late nights I spent reading lobster risotto recipes to help me get over a break-up and I’ve been watching YouTube videos of people preparing and eating lob-ris for years. This is a dish I’ve seen on the Food Network so many times that I might get a bit starstruck when the wait staff actually puts it in front of me. Hopefully, I can get the chef to autograph my shirt at the end of the night.”

“I thought my sous chef was playing a silly kitchen prank on me when they first told me. I didn’t think someone would actually be that lame, but there he was, grinning ear to ear doing this weird little dance in his chair while he waited for his food,” recounted an amused and slightly off-put Chef Terzoli. “On one hand, I always appreciate the patronage of my restaurant, but on the other, I mean how fucking lame and desperate is that? C’mon! You show up wearing a shirt with a picture of lobster risotto and ‘#LobsterRisottoLife’ written across your shoulders? Sorry, but this is too cringy for me to discuss any longer.”

“Yes, this was indeed a total poser move,” scoffed Ferrara. “A seasoned and refined food fan would have chosen a t-shirt within the same genre of food being prepared at the restaurant, but not the exact food being eaten, of course. Perhaps a sea bass, Coq Au Vin, or foie gras combination would have worked. Or even an ironic T-shirt with a black and white photo of a single crouton would have let the other patrons know that they were serious. Someone needs to say something to him so he stops being an embarrassment to his entire family.”

At press time, Miller was spotted ironing his favorite Chicken Tikka Masala shirt before heading out to a trendy local Indian eatery.