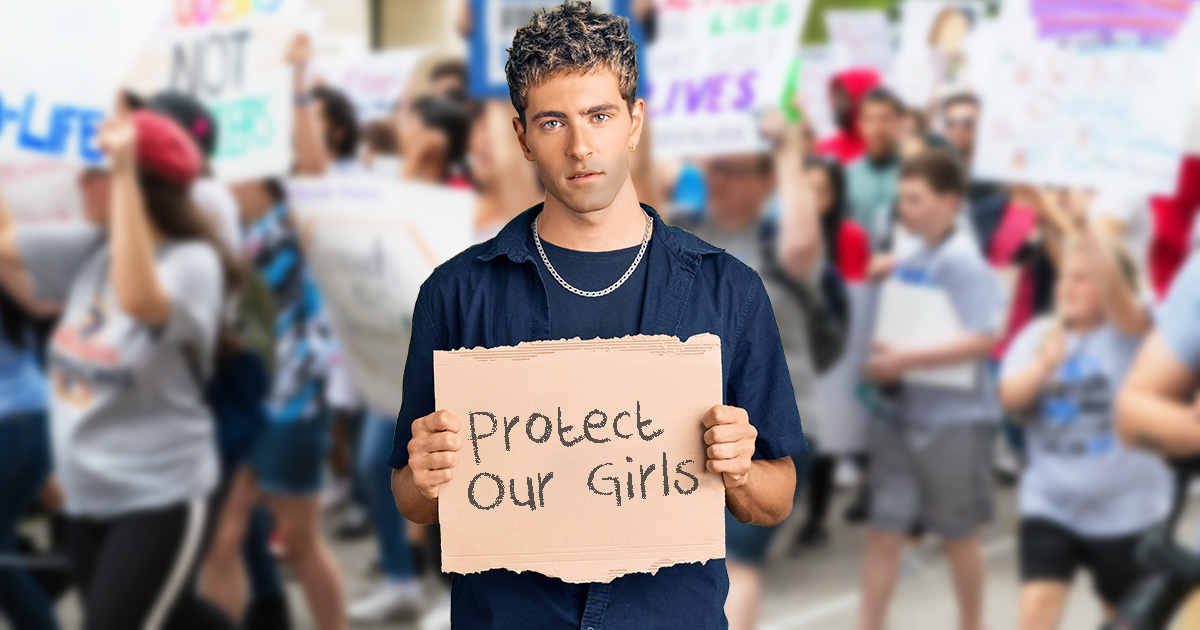 MASPETH, N.Y. — Skull Valley frontman Jeremy Cesiro is worried his underage girlfriend would be put in danger by her returning to high school in two weeks, slightly creeped out witnesses protesting outside the school alongside the pop-punk singer confirmed.

“My girlfriend Rosa might only be 17, but she’s very mature for her age, and who knows how coronavirus affects people like her,” said the 25-year-old Cesiro. “She doesn’t realize she doesn’t have to do whatever adults tell her to, and that I could teach her so much more about the world than any school. Plus, since she’s been in a quarantine pod with me and my band, she’s the only one who can watch us practice. I don’t know who we’d play for if she got sick, and I really miss the crowd.”

Multiple witnesses report Cesiro held a sign that read “Protect Our Girls,” and asked school faculty members if the girls volleyball team would be resuming practice, and if so, when that might be.

“I don’t understand why he was at the protest,” said Maureen Nollen, the school’s gym teacher. “He was too old to be a student, but too young to be a parent. I told him I didn’t know yet if we’d have volleyball this year, but then he asked me about other sports, like soccer and softball. And when I told him I didn’t know about those either, he said I should watch his Valley Skulls or whatever on Twitch, because they do a nightly stream.”

“He was wearing a mask the whole time, which I appreciated,” Nollen added, “but his mask read, ‘I’d Rather Be Eating Pussy,’ which I found upsetting.”

Notably absent from the protest were Rosa’s parents, Milo and Donna Melia, who aren’t convinced that reopening schools is a bad idea.

“If I know for eight hours, every day, that my daughter is in school, that’s eight hours I know she’s not spending that awful boyfriend of hers,” said Donna Melia. “Of course I’m worried about coronavirus, but let me ask you: what’s scarier? Coronavirus, or your 17-year-old daughter dating a 25-year-old musician? We’re telling her to go to school without a mask on, because if they can’t see each other for two weeks, odds are good he’ll move on to some other teenager, and that’s her parents’ problem.”

While Rosa could not be reached for comment, we were anonymously sent a post on her finsta where she admitted to dating Cesiro because he has “really good weed.”