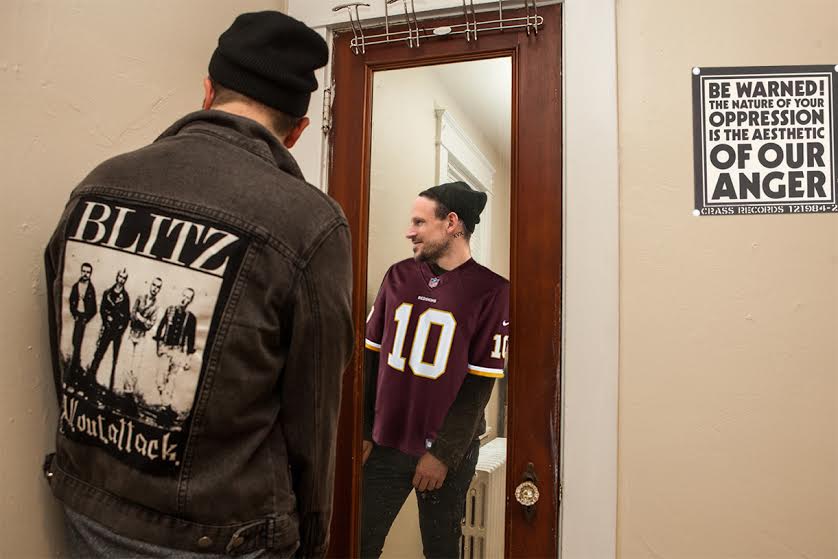 TAKOMA PARK, M.D. – Mikey Lewis, a political punk with a penchant for calling out people on Facebook, was excommunicated from his local radical community this week following the discovery that his closet is full of skeletons wearing Washington Redskins merchandise.

Lewis’s lifelong love of the Washington football franchise had remained a closely guarded secret during the time he spent booking shows, running food drives, and creating outreach programs for homeless children, but the recent revelation has left many questioning his ethics. Former friend and fellow Food Not Bombs volunteer, who refers to himself as Blotto, was the most outspoken critic of Lewis.

“Obviously Mikey’s presence has become incredibly problematic. He’s exposed himself as an old-fashioned, plantation-styled racist and supporter of a billion dollar corporation that exploits and profits off of bigotry and hatred. He is the worst kind of scum this world has to offer,” said Blotto. “Would you trust someone like that to hold open the Trader Joe’s dumpster for you? I don’t.”

Lewis’s web of lies began to unravel after his mother, Sharon, uploaded a photo to Facebook of a 7-year-old Lewis cheerfully receiving an embrace from the highly controversial and unofficial Washington mascot Chief Zee. Lewis quickly untagged himself from the photo of him and Chief Zee, who has frequented Washington’s games since the 1970’s in full Native American garb, but this proved to be too-little, too-late.

“Oh, Mikey has always loved the Redskins,” commented his mother Sharon. “When he was a little boy we would put a feather headdress on him for every game. He was our little good luck charm! He would do a little rain dance every time someone scored a touchdown. It’s a shame that Mikey’s new friends don’t understand that the name ‘Redskins’ is paying honor and tribute to the Indians and is not racist at all.”

Desperate to salvage his image Lewis released a statement via Facebook.

“Judge me all you want. I know who I am as a person and I stand by my convictions,” said Lewis before adding, “But politics aside I think that despite a rough start to the season they made the right move going with Cousins as the starter. RGIII is a great natural athlete and very well spoken, but Cousins is the better game manager and has a better mind for football.”

Article By Chris Henley and The Hard Times Staff @REALpunknews.