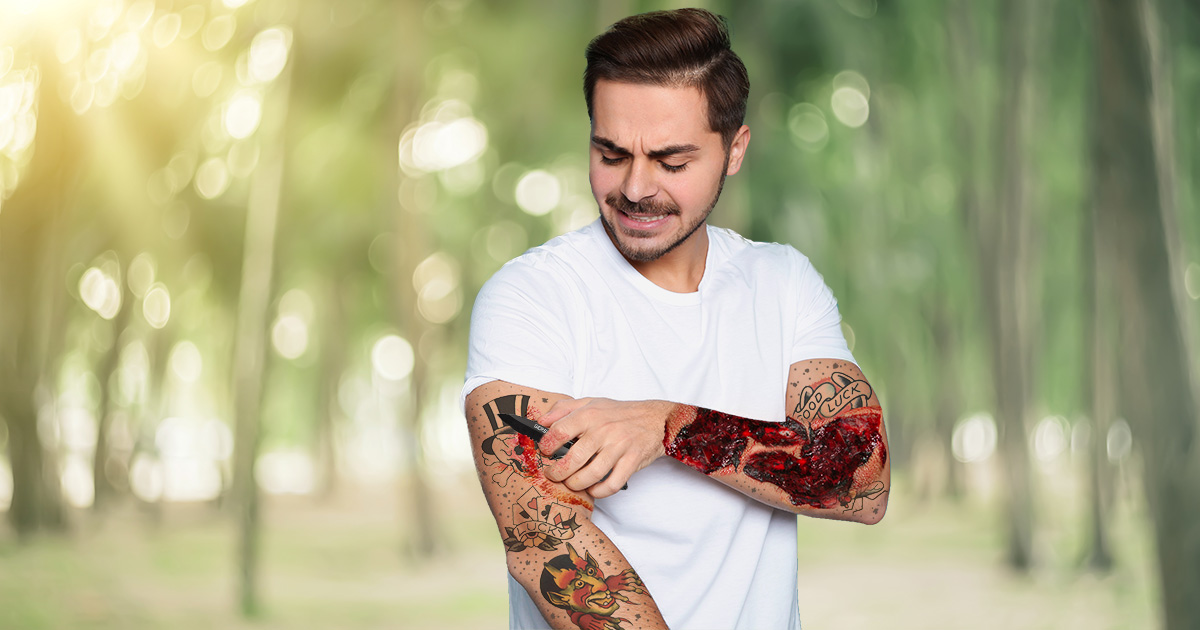 VENICE, Calif. — Local hardcore guy Dan “Nukka” Reilly was rushed to the emergency room with massive blood loss yesterday after attempting to remove the skin from his heavily tattooed arms to cool down in the summer heat.

“It was a nice day, so I was practicing some roundhouse kicks down by the elementary school. But I started getting really hot… like, sweating uncontrollably,” said Reilly from his hospital bed. “I already cut the sleeves off my Death Before Dishonor shirt, but then I looked at my tattoos and realized they were technically sleeves too, so I pulled out my boot knife and started cutting.”

“I was able to get both arms off before passing out,” he added. “It was kind of like skinning a chicken leg, but I actually felt cooler right before I pretty much died.”

Reilly’s long-term on-and-off girlfriend Molly Fitzpatrick thinks the experience could have been avoided.

“I warned him it was too hot outside for his bullshit. But he gets all hyped up when he listens to Slapshot’s ‘Back on the Map,’” said Fitzpatrick. “I guess I’m glad he’s alive, but I’m going to miss a couple of his tattoos — the Fighting Irish guy, and the crossed bats were all great, but I’m not going to miss the stick and poke tattoos of every girlfriend he’s had since the 6th grade. Silver linings, I guess.”

While rare, experts note that incidents like Reilly’s have increased sharply in recent years.

“With global warming, we’re seeing punks of all kinds affected by the summer heat: from emo kids suffering from bang sweat rash, to crust punks cooking alive in dumpsters, to goth kids simply turning to ash when they set foot outside,” said Meteorological Counter Culture Director, Dr. Benjamin “Chunk” Nelson. “And as an old hardcore kid myself, I can see why you’d think that the 1/1600th inch of ink is what’s causing you to be hot. I’m just glad he survived.”

Reilly was unavailable for further comment, as he was heavily sedated to halt his daily floor punching workout.