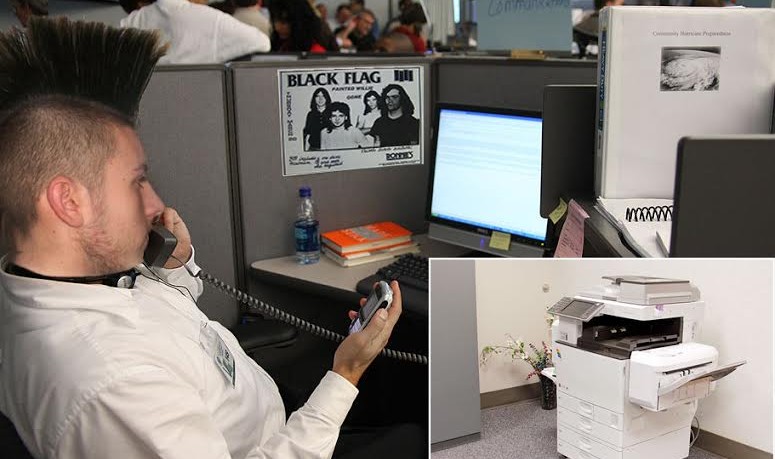 SARASOTA, Fla. – Office worker and self-described punk, Brian Nesom, had a sudden and overwhelming sense of dread while leaving work Friday evening. Right as he reached into his pocket to grab his car keys, Nesom realized he left a show flyer for his punk band, The Gutter Sluts, on the office copy machine.

“Shit-fuck-ass,” Nesom whisper-yelled while pacing next to his Honda Civic. “I can’t get back in there until Monday. FUCK!”

Nesoms boss locks up the entire office every night at 5 p.m. sharp.

According to company policy, personal use of the copy machine is strictly forbidden and could land Nesom in some hot water. But the fear of punishment is not what concerned Nesom, but rather the content of the flyer itself.

The show advertised on the disgusting excuse for a flyer is scheduled to take place in two weeks at Sarasota’s preeminent punk bar, Rusty’s Trombone, with Nesom’s band The Gutter Sluts playing in support of national touring acts The Cooze Daddies, Lucifer Ass Play, and Chain Brick.

After spending 20 minutes in the parking lot hoping to find a way back into the building he spends all week dreaming about leaving, Nesom finally decided to call it a night.

Related: Band Member Afraid to Request Time Off From Dead-End Job He Hates

“I’m fucked man. I could try to come in early on Monday and be the first person to the copier, but I spin records at a depressing punk DJ night every Sunday at the Dumpster House. It makes me feel young again,” Nesom said as he pulled into traffic.

UPDATE: Office custodian Donald Miller claims to have found the flyer during his nightly rounds. “I am a huge fan of The Cooze Daddies, I am glad I stumbled across this. I wonder who it belongs to?” Miller said before gently returning the flyer to its original, face-up position on the copy machine.