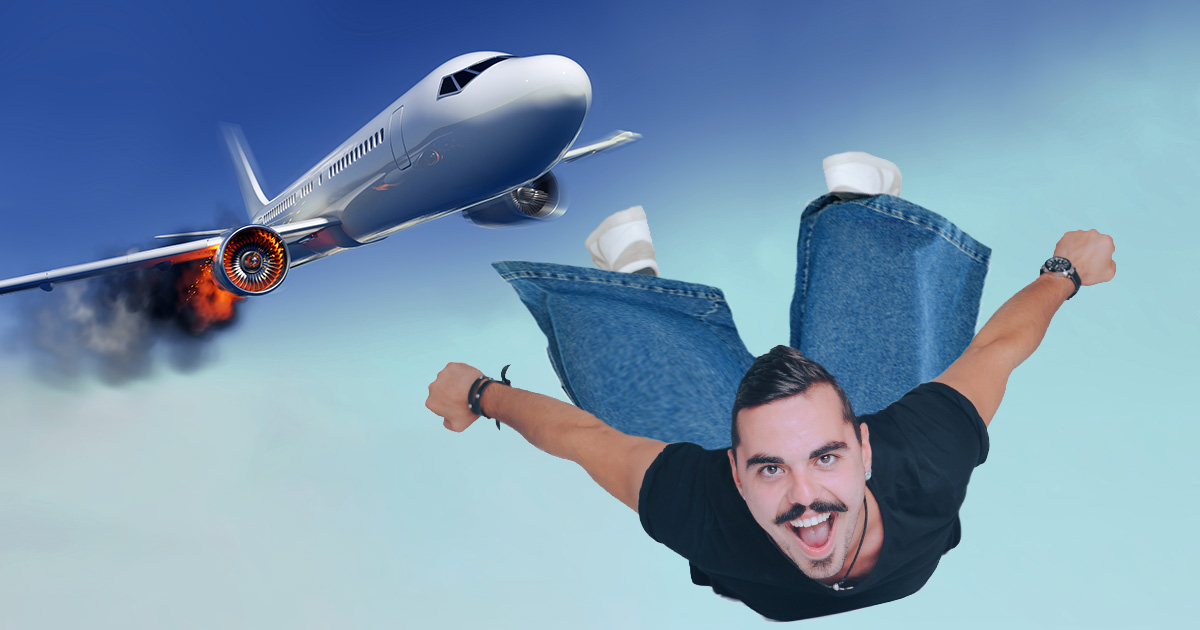 VANCOUVER — Nu-metal fan and dedicated JNCO jeans wearer Chad Willis was the only surviving passenger of a plane crash that left 85 dead after his comically oversized pants served as a de facto parachute, astonished sources confirmed.

“I heard a big bang and then I blacked out. I guess the engine blew up and we started going down,” said Willis of the crash. “Next thing I know I’m free-falling, then I hear this heavy ‘poof’ sound and everything slowed down. I looked up and my pants were all puffy. I got made fun of for wearing my JNCOs all the time by my friends, parents, and most of the staff of the plane as I got on, but the joke’s on them now. These pants saved my life! I had tickets to see Limp Bizkit play in Sacramento, so I’m pumped I still get to go.”

Onlookers were shocked to see the man slowly descend from the sky before landing safely on a nearby beach.

“We saw this ball of fire falling into the ocean, and we were all totally freaking out,” said local man Graham Peterson. “And then we see this blue blob, with what I’m pretty sure was a fuzzy dice patch sewn onto it, slowly floating toward us. My mind was racing wondering if it was some terrorist attack or like, alien invasion or something. But then this guy in giant pants with frosted tips landed like six feet in front of us and asked us if we could play some Korn on our beach speaker. He must have been in total shock.”

JNCO co-founder Haim Milo Revah provided condolences to the families of the crash’s victims, but also acknowledged that his product could save a life.

“When I designed the first JNCOs people thought I was crazy, but we were a phenomenon in the ‘90s,” said Revah of his famously wide-bottomed jeans. “We may be responsible for the loss of countless sex lives during that time, but today our front scoop-adorned design saved one. We appreciate still having our dedicated fans even if the jeans aren’t flying off shelves the way they used to. Hmmm. Flying. I think I have an idea.”

At press time, Willis was named the official spokesperson for JNCO’s new “Every Airport Needs a JNCO Store” campaign.