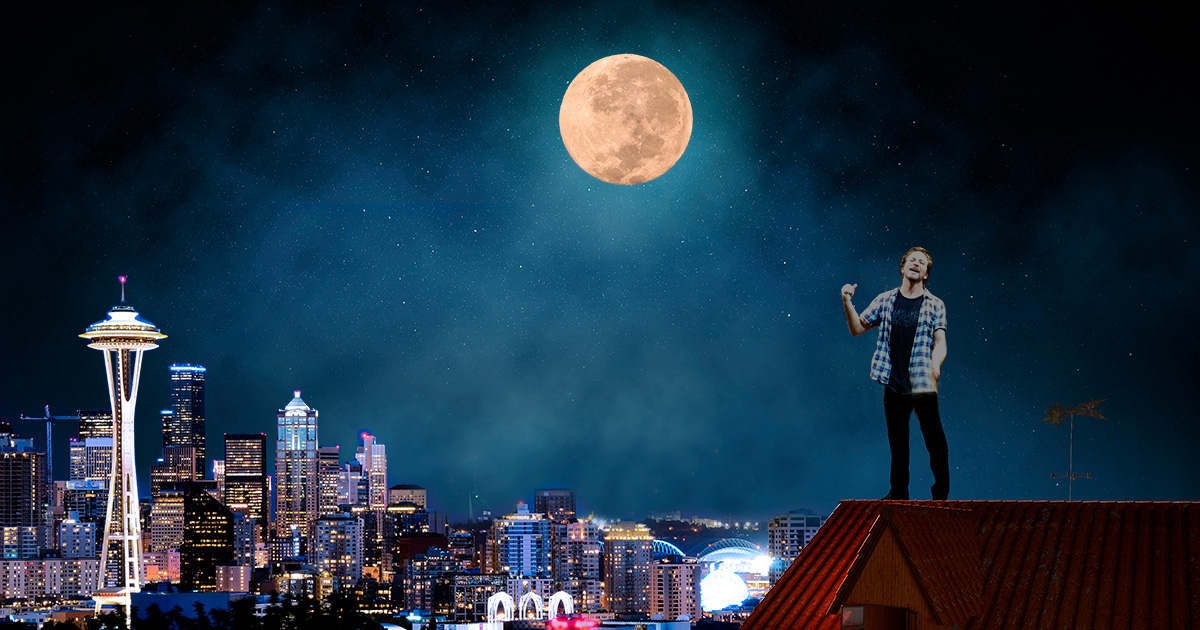 SEATTLE — Seattle Police responded to a noise complaint at the home of Pearl Jam frontman Eddie Vedder last night after neighbors complained he was once again howling at the moon from his roof.

“I’m fed up with this shit happening night after goddamn night,” said exasperated neighbor Lisa Weinstein. “I’ve done everything to try and avoid involving the authorities, but I’ve gone over there to address him about this weekly and it’s still happening. Every fucking night, I’m jolted out of bed by him howling ‘Even Flow’ at the top of his lungs like some kind of goddamn feral dog. As a Pearl Jam fan, I was excited about living next to him… but if I’d known what I’d be putting up with, I’d have told the realtor to shove the deed up his ass.”

The Vedder household expressed sympathy for their neighbors and said they were doing everything possible to fix the situation.

“I understand their frustration, and I… Eddie! Get back in the fucking house. I’m not telling you again,” said Vedder’s wife Jill McCormick while chasing the frontman around the front yard after he got loose again.

“I’m at my wits end with this,” she confided after confining Vedder back inside. “I have to get up to let him out every night, and he promises me he’s not going to scream ‘Yellow Ledbetter’ from the roof… but each night, I’m out there freezing my goddamn ass off to get him back inside before the neighbors call the cops. I’ve tried everything from crate training to sticking his head in a bucket of water. If this doesn’t work, I’m going to have to get his vocal cords snipped.”

For his part, Vedder insisted that this was a part of his nightly ritual to communicate his well-being with Pearl Jam fans in the Seattle area.

“What people don’t understand is I have to do this, for the sake of all Pearl Jam fans out there,” said an apologetic Vedder. “With Cobain, Staley, and Cornell gone, I’m the last of the Seattle frontmen, and I know grunge fans need the reassurance that I’m doing alright. I feel like the internet lacks the personal touch, and it’s been hard to get out and about with the pandemic, so I figure singing ‘Alive’ from my roof on a moonlit night is the best way to do it.”

McCormick is reportedly looking to start a support group with the families of Scott Stapp and Chad Kroeger.