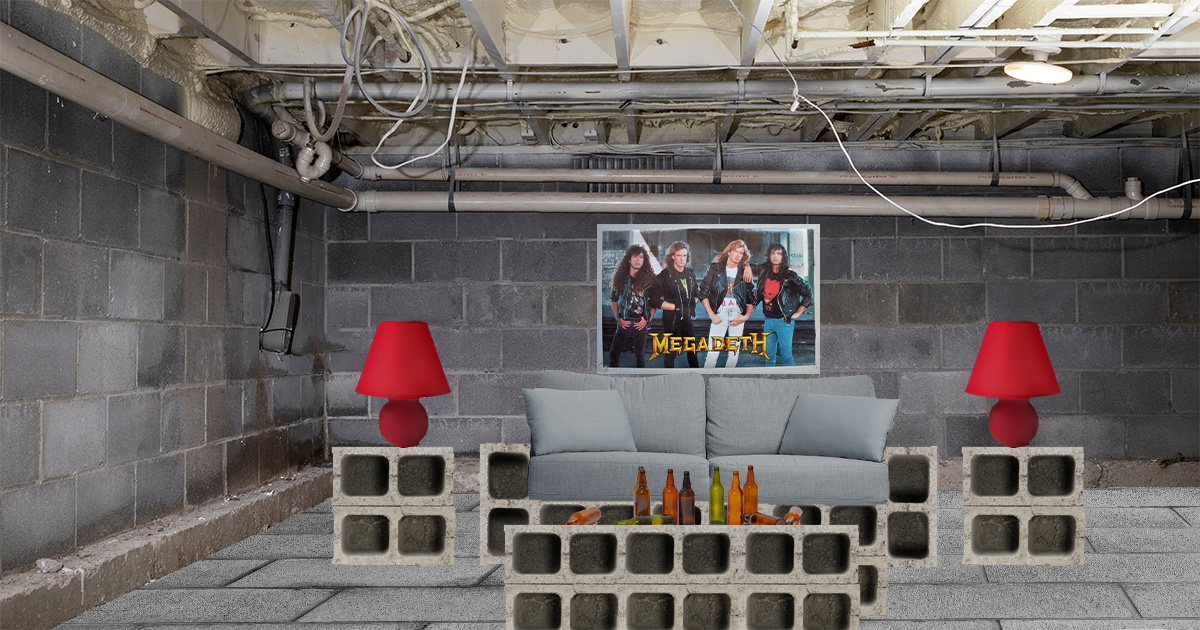 PHOENIX — Local Metalhead Josh Gunderson beamed with pride after realizing he is very close to owning a living room set thanks to several cinder blocks and pieces of plywood, sources confirmed.

“Ever since I was a young metal grom I dreamed of having my own place where I could put up my Iron Maiden posters, play music, and build a suitable living space. I knew it was time when I finally moved out of my Aunt’s shitty basement, and into my cousin’s rad basement,” beamed Gunderson from his nearly finished living room. “When I started with just a few boards and blocks, for my dragon sculptures and Ed Gein books, of course, I could have never imagined it would be this metal. Now I have a coffee table, side table, and an entire entertainment center all made from two aisles at Home Depot and some stuff I found on the free section of Craigslist.”

“When these final four blocks are in place, and I have a home for my sweet Skull Bong, I’ll feel like I have finally made it in this world.”

“Josh is a nice kid, but hasn’t always had an easy time finding his proper space. He’s been kicked out of everywhere from Sunday school, to high school, so it makes a mother proud to see him building a future for himself,” said Lockhardt. “A future filled with industrial supplies used as furniture. I would have told him how proud I was, but I don’t think he could have heard me over something called ‘Gorgoroth’ being played at top volume on his huge stereo system.”

After hearing of the success of Gunderson’s living room, President of Construction Solutions Limited, Mike Daniels, has announced that they will begin offering an entire line of counter-culture home furnishings.

“We are so happy Mr. Gunderson found our products so quality in his ‘headbanging’ creation, we decided to name an entire line of cinder blocks after him. These blocks will be candle wax resistant, sweat-resistant, and painted with a rattle can in black or red,” said Daniels. “This not only opens up our market to include an entire subculture of potential consumers, it also utilizes thousands of pounds of scrap material we would have only gotten pennies on the pound for thanks to this guy we know out in Mesa. A win for everyone.”

Gunderson was unavailable for further comment as he was arguing whether Ibanez or Jackson guitars had better action with a neighborhood kid.