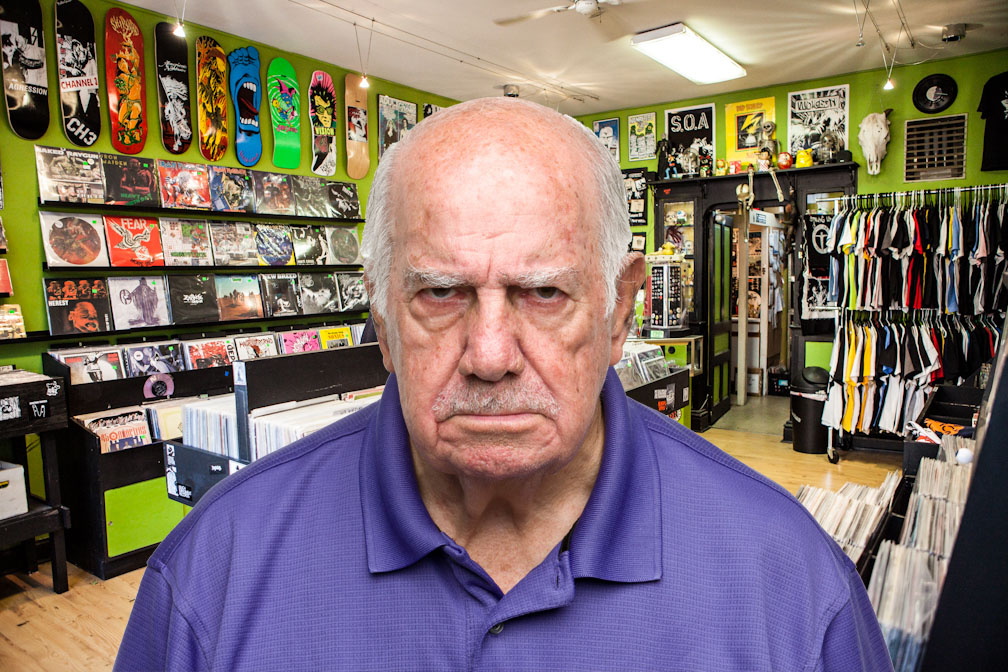 “I’ve made a lot of money over the course of my career, and I’ve found that it only brings problems and pain,” Cain explained. “So I opened up a record store that caters to punk and hardcore fans.”

Cain, 66, already lost most of his fortune in an ugly divorce from his ex-wife three years ago. Uninterested in music, Cain sees his new venture as an owner of an independent record store as the best way to burn the rest of his capital.

“I figured vinyl is a dead format several times over. It was killed by CDs in the late ’80s, then again by MP3s and iPods, and now people don’t even buy those. You can stream everything I have for sale in the store on Spotify, and that thing is fucking free,” Cain told The Hard Times while walking us through his store. “Also literally every single record in this place is warped. It’s just a shitty format.”

On the weekends, Cain allows the most abrasive and violent local grindcore and powerviolence bands to play inside Slam Groove.

“I let the bands keep any money from the door. There also tends to be a lot of violence, destruction and underage drinking at the shows. I’ve already been fined several times by the local police,” Cain mentioned casually. “Last week, when Dog Meat played here, this 300-pound guy swinging from the plumbing went flying into the “Used Hardcore – A through F” section. He went through that, then my new window and landed on the sidewalk outside the venue, where he immediately began drinking. That show will probably end up costing me $5,000.”

Related: 50,000 LPs Stacked in Garage Not Nearly as Warped as Record Collector’s Mind

Cain estimates that the store has already lost him upwards of $80,000 in the short time it’s been open, including the hefty cost of hiring a private investigator to track down and promptly pay anyone who successfully sells their records on consignment. He also projects that the general lack of demand for the products he is providing will ensure the store continues to hemorrhage money until he is bankrupt or, as he puts it, “finally free.”

“When I sold my first company, I bought a Maserati and mansion in the Hollywood Hills, but that goddamn floozie took everything. She took my car, my house, and my kids,” Cain said, his eyes welling with tears as he looked off into the distance. “And I loved that car. I just honestly don’t give a fuck what happens to this store or to me anymore.”