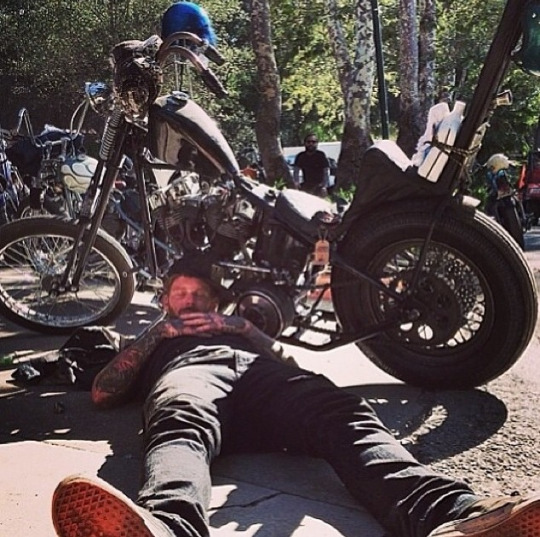 RENO, Nev. – At first glance, local man Russ Wilson might seem like someone you wouldn’t want to run into while strolling down a dark alleyway. His knuckle and neck tattoos, combined with a greasy slicked back hairstyle, paint the picture of an all-around badass ready to defend the patch embroidered onto the back of the leather vest he wears daily. But after looking a little deeper, it’s obvious that Wilson has molded his entire image around the popular FX television series, Sons of Anarchy, that recently completed its seventh and final season.

“Russ was a total dork in high school,” long time friend Lonnie Hunt said. “He marathoned a whole season of Sons of Anarchy on Netflix one day and threw out all his ska records the next. Since then, all he talks about is how great Johnny Cash is. Seriously, he never shuts up about Johnny Cash.”

Wilson is one of thousands of young men that almost instantly purchased a motorcycle without any prior interest immediately following exposure to the hit TV show. Early Facebook pictures, that Wilson has untagged himself from, show a clean-cut man with very few visible tattoos wearing checkered Vans Slip-Ons. Today he is nearly covered in tattoos that have sometimes got him in hot water.

“I go to this biker bar where lots of, like, ex-cons go to unwind, and this one guy got all in my face asking me what my tattoos mean and where I did time. I just stood right up to him and told him to back off and I don’t need to answer to him,” Wilson recalled.

His friends tell a different story. “Oh, that time he almost shit himself at Ruby Tuesday’s when that old guy with the pony tail got in his face? You could see the tears in his eyes – it was hilarious,” Hunt said.

With the show over after seven seasons, many of Wilson’s friends are wondering what new show featuring strong male anti-heroes with mother issues Wilson will begin to mimic next.

“I have been thinking about getting a new hair cut, I really like the style on Peaky Blinders. I see a lot of similarities between me and Tommy Shelby,” Wilson said after a recent Netflix binge watch.