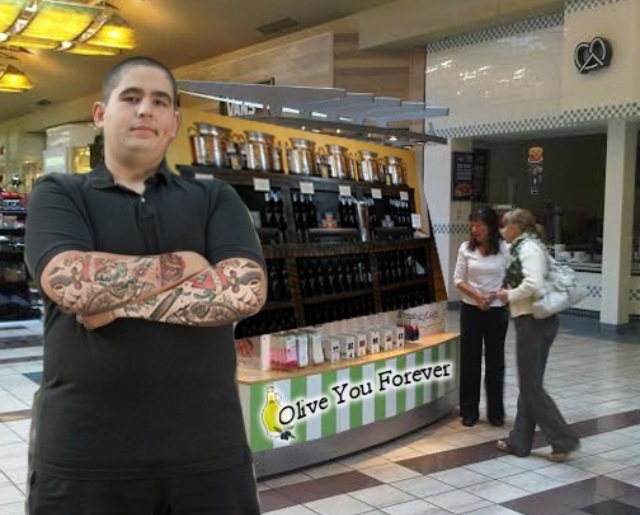 Avery, widely considered to be one of the most influential frontmen of his generation – in both a musical and personal sense – can be found at the Twelve Oaks Mall working at the “Olive You Forever” gourmet olives kiosk on most weekdays.

“It’s crazy to see him here. I would be at every Turnaround show in the 90s. That guy right over there in his little uniform was my hero growing up. I guess it’s kind of sad, in a way. He spoke with so much charisma and passion on stage about life and all its challenges but now he just hands out free olive samples,” Robert Norton, a patron of the mall, said. “I wonder if he is still straight edge?”

After about 30 minutes of explaining why exactly Hard Times reporters weren’t trying to interview him for a documentary about Turnaround, Avery agreed to speak with us about his current situation.

“Check it out, man, I wouldn’t change a thing. Hardcore introduced me to some of the best people in the world and now I get to house sit for them when they go on family vacations. Our first guitarist quit the band to go to college – he is a chemical engineer for BP now – and I stay in a room above his garage,” the legend said.

Although he used to sing in front of hundreds of enthusiastic kids who knew every word to his songs, Avery says he’s happy waking up and catching the 5:30 a.m. bus to clean olive jars and take shit from his 18-year-old supervisor, Vanessa Morton.

Morton praised Avery for his good work ethic and natural ability to sell gourmet olives, but added, “I just wish he didn’t dress like a teenager; he is in his 40s and it’s starting to look a bit desperate.”

Article by The Hard Times Staff. Photo by Jason Mazzola.