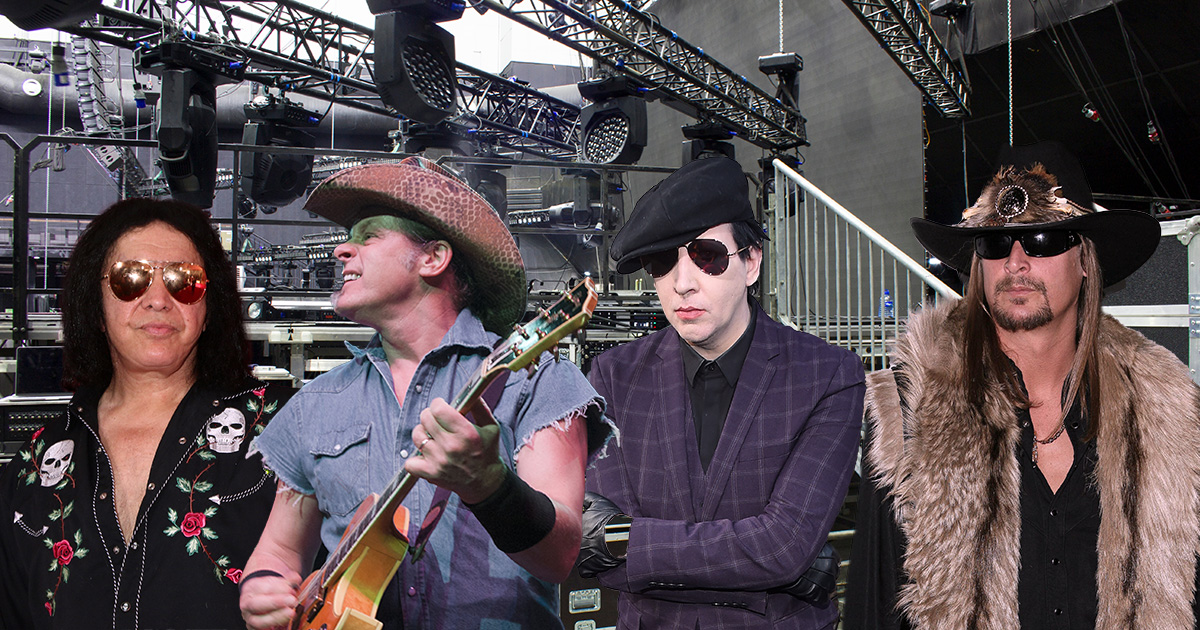 “As the most prolific sellout in rock history, I’ve spent the past 50 years slapping the KISS brand on everything from coffins and air guitar strings to at-home pregnancy tests and LSAT prep courses. But having wrung that money sponge dry, it was time to start a new band to further my evil empire,” explained Simmons. “So I gathered the most repugnant rogues I could find–Rock, Nugent, and Manson– to form the music world’s first ever supervillain group. We’ve spent the past four months recording songs at a fortified stronghold inside a volcano, sponsored by the Los Angeles Police Union, and we’re finally ready to unleash terror upon our fans.”

Former music lover Katharine Ingram scored tickets to one of the new band’s early shows, a move she later regretted.

“Look, I know they all have a history of shitty and sometimes literally criminal behavior, but I still was excited to see them play. Though I expected way more considering I paid $400 for a nosebleed seat,” said Ingram. “Like, holy shit, what a cacophonous mess. How did they not realize a band with four lead singers and no drummer was a terrible idea? Then midway through the show, they all pulled out some binoculars so they could ‘scope out the college chicks’ in the crowd. I had to personally usher several underage teen girls out of the venue as Nugent and Manson chased us down.”

Genteel alt-rocker Michael Stipe has chosen to fight back, citing an existential threat to pop culture and the world at large as his main motivators.

“We mustn’t allow rock and roll to evolve into a tool for evil,” explained Stipe from his technologically sophisticated hoverchair. “This is why I am starting Professor Stipe’s School for Benevolent Rock Stars to help teach the new generation of musicians how not to be abusive and mean-spirited dicks. School faculty will include Dave Grohl, ‘Weird’ Al Yankovic, and Soccer Mommy. Plus, we’re offering a jiu-jitsu elective taught by Maynard James Keenan.”

Most recently, Simmons appeared on Newsmax and threatened world leaders with a 50-city international tour unless his demands are met.