Keith Richards Snorts All 10 Sauces During “Hot Ones” Appearance 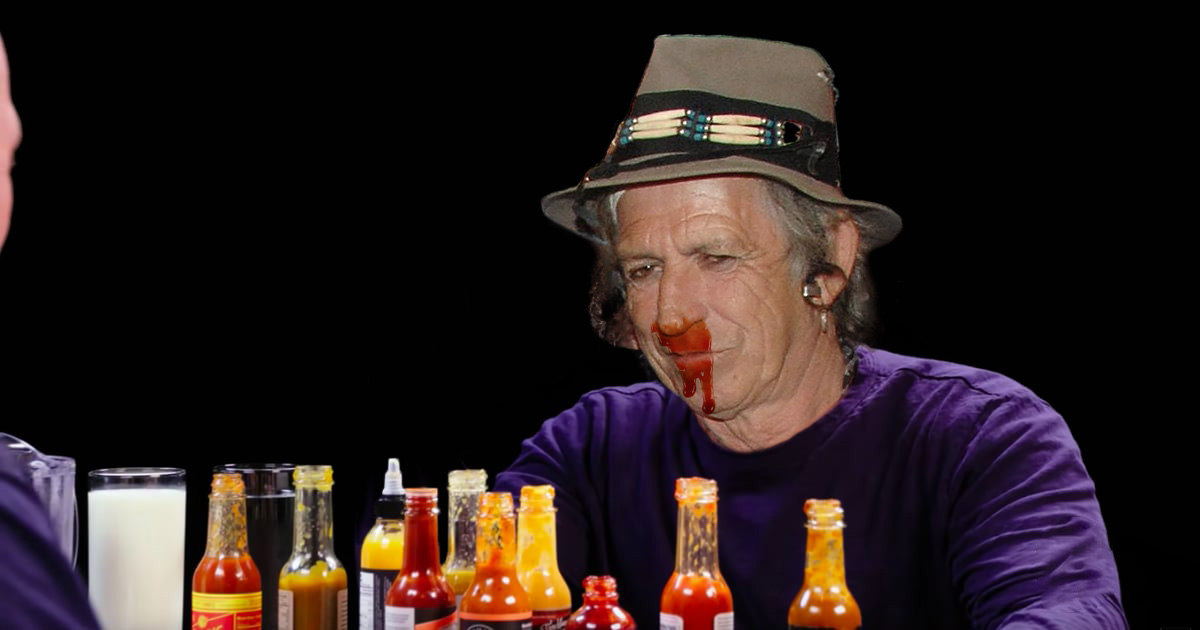 “When it was time to bite the first wing, Keith fell face-first on the table and I thought he had a heart attack,” recounted host Sean Evans, who has never snorted hot sauce in his life. “But nope — he was fine. So fine, that instead of biting the wing, he snorted a line of our very own ‘Classic’ hot sauce and then plowed through the rest without flinching. These sauces would destroy the nasal cavity of a normal man. Not even Coolio went that hard.”

Richards is legendary for his abilities to shovel all sorts of small items in his nose.

“Keith? He fuckin’ snorts everything. I’m pretty sure that’s how he eats all of his food now,” explained former Rolling Stones bassist Bill Wyman. “One time, we were on tour in Japan… probably 1978. We’re in the middle of ‘Miss You,’ and I break my low E string and it gets jammed in the bridge. Our guitar tech can’t get it out, and neither can I, but Keith casually strolls over and snorts my broken string right out.”

“It’s probably still up there in his nasal passages, along with a few nipple piercings and a quarter-kilo,” continued Wyman. “I mean, he snorted his father’s ashes, for fuck’s sake!”

Rock historians have studied how legends from the “Golden Age of Rock” can maintain relevance in the era of social media, podcasts, and internet culture.

“It’s no surprise that Keith Richards blew the door open on ‘Hot Ones’ — his body has been pickled by drugs for decades,” explained music scholar Carla Stannick. “You could see Keith was underwhelmed by the ‘Last Dab.’ I’m assuming it’s because he thought it would get him high, but it looked like he barely got a light tickle he’d mistake as a seasonal allergy at worst.”

Richards allegedly then muttered, “I thought that was supposed to be spicy!” before snorting a mound of wasabi, yellowtail, and several ounces of soy sauce for lunch with an aperitif of cocaine and port wine.