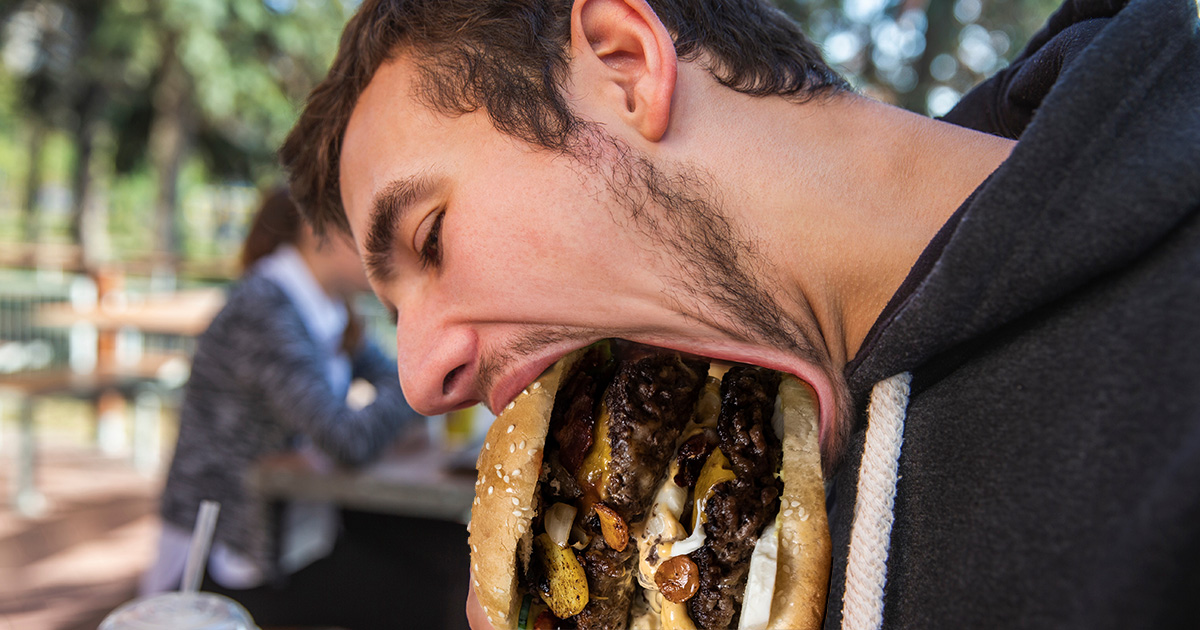 CHICAGO — Local man and self-proclaimed foodie Harry Blanks unhinged his jaw like a Burmese Python in order to take a bite of the coveted “Cuddledeth Burger” at Burger Bizarre, grossed out witnesses confirm.

“Totally worth it,” Blanks stated, struggling to harness his mouth’s ability to pronounce the words. “I’ve heard about the Cuddledeth Burger for a while. I knew it was going to be a feat, so I started doing two-a-days of jaw flexor exercises a few months ago to prepare. I also took on another job in order to afford it. Thankfully, by the time my spot on the waitlist opened up, I had a few hundred in the bank and was able to flex my jaw up to a foot and a half. I was finally ready.”

Blanks’ friends have grown concerned with his continued determination to conquer the menu of burgers.

“It’s kind of a nice conversation starter when I tell people I know someone who literally dislocated their jaw eating a sandwich, but this is too much,” said close friend, Hallie Corbett. “He couldn’t even chew that thing. His body just turned into one giant muscle and like, squeezed the nutrients out of it over the course of nine hours. He’s been to the E.R. no less than six times to pop his jawbone back in place, and he has exactly zero shirts that aren’t covered in grease, caramelized onion stains, aioli, and blood. Not to mention the effects on his body after ingesting so much meat and brioche.”

Burger Bizarre chef and owner Ben Anderson has yielded nothing but a positive gain over obsession with the burgers.

“People seem to love taking pictures with these damn things, so I just plan to keep making them bigger and more expensive,” said Anderson. “I really just want to see how far we can go by stacking leftover ingredients over and over. You toss a handful of fried onions and some moldy goat cheese on top of a wholesale meat-patty from Costco, slather it with honey and name it after a band that’s touring through town, and these suckers can’t get enough of it. They’ll lap it up for breakfast, lunch, and dinner.”

At press time, Blanks’ body had exploded after attempting to eat one french fry.