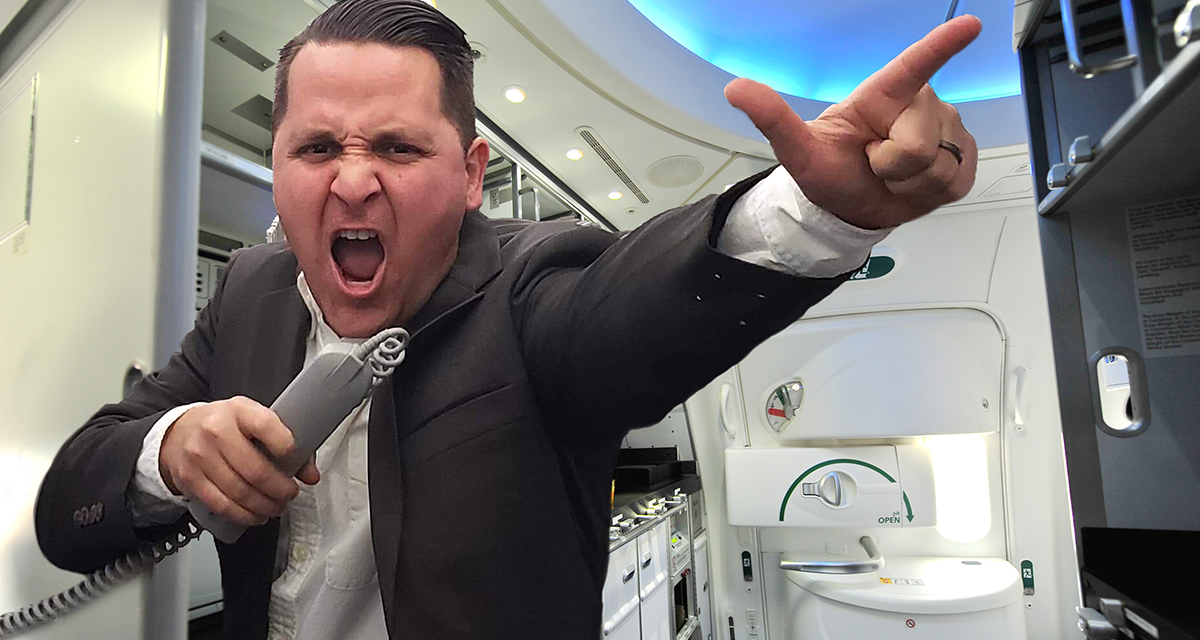 “He seemed really worked up,” said passenger Teresa Larson. “Once the door closed, he used that little intercom thing to ‘shout out’ all of us in the back 25 rows as ‘the misfits and the fuck-ups,’ and the only ones who truly understood ‘the struggle.’ Then it was another three minutes all about unity, brotherhood, and how our seats cannot be used as a flotation device.”

The standard pre-flight safety announcements set up the next several minutes of Ray introducing the other members of the crew.

“Yo, when I get on that PA, it is my time to shine. I spread that glow over everyone with me in Airbus A321 because we are in this together — one family,” Ray said as he prepped for the first round of food service. “Without Linda up front, Big Tim and his main man Lucky Luke in the cockpit, and Jenna back here with me on pretzels and cookies, this flight can’t happen. But, at the end of the day, it’s the people who paid too much for a ticket and were hit with a bunch of unnecessary fees that make this all possible, and I want them to know that I see them.”

Despite overwhelming support from the back of the plane, some passengers were allegedly upset by Ray’s comments.

“Quite frankly, that man made me feel uncomfortable,” said frequent flyer and Delta Medallion Diamond member Dr. Angela Reyes. “He kept calling everyone up front ‘a bunch of sellouts,’ and invited people from coach to use the bathrooms reserved for first class passengers. He certainly swore a lot more than I would have liked. I wish he could have just done a funny skit like I see from Southwest flight attendants on Facebook.”

As of press time, Ray was handing out pamphlets on the benefits of being an ethical vegan to each passenger who did not order the vegetarian food options.