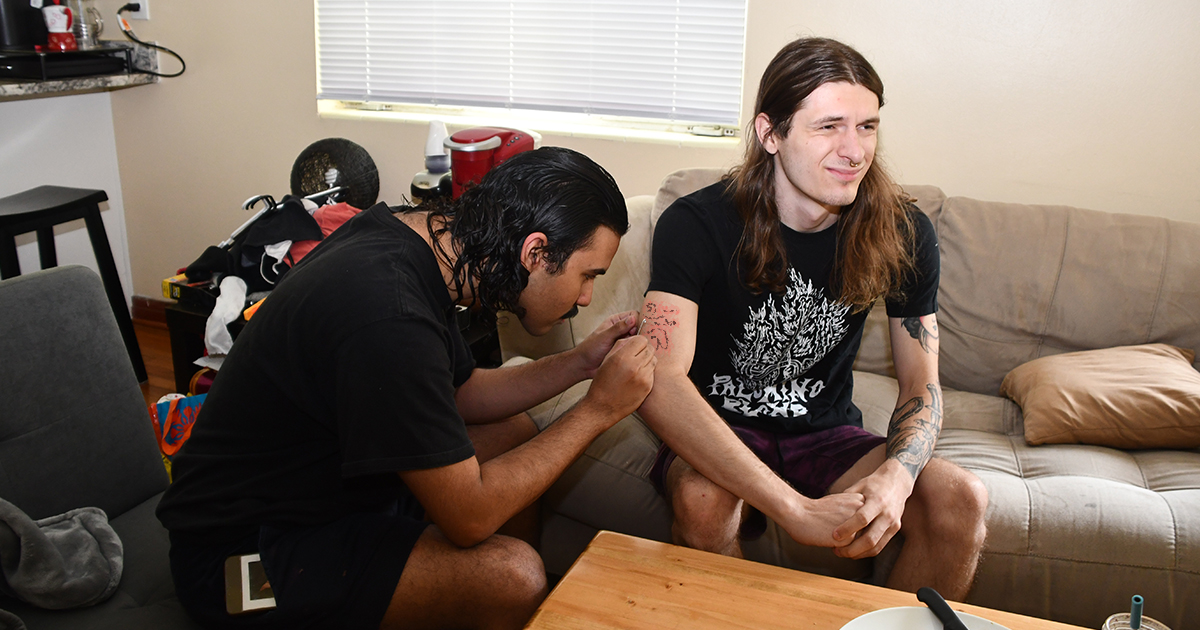 LAKEWOOD, Colo. — Local man Sean Richard is already showing signs of severe infection while getting a stick and poke tattoo from a close friend that claimed it would be “fine,” confirmed multiple grossed out sources.

“Yeah I’m starting to feel a little feverish and my arm looks kinda swollen, but that’s probably just from the brand of ink we’re using. It seems like people sometimes forget that tattoos are supposed to hurt, a little blood is normal, and your lymph nodes swelling up to the size of grapefruits is all part of the process,” said Richard while sitting in a puddle of his own sweat. “Scott (Calpin) did drop the needle on the ground, but he picked it up right away, and said ‘five-second rule.’ That’s as good as running the needle through an autoclave if you ask me.”

Calpin, who is notably not wearing gloves during the process of tattooing Richard, became defensive at the suggestion that Richard’s tattoo may already be infected.

“Everyone here is being way too sensitive telling me to ‘stop’ and ‘bring Sean to the hospital before this gets so bad they have to amputate his arm.’ I’ve done this dozens of times, I know what I’m doing,” said Calpin while wiping the tattoo with a wet fast food bag he found in the garbage. “This pus here is probably just from a pimple Sean didn’t know he had. We’re almost done anyway, and it’s gonna look sick once it’s finished. I’ve tattooed three other people this month and they’re all fine. I’ll do you next if you want, and if you’ve got 20 bucks.”

Linda Kane, a nurse at a Lakewood urgent care, saw some of the tattoo progress in a series of Instagram stories and was immediately distressed.

“I’ve seen a lot in my 18 years at this job, but nothing prepares you for something like that,” said Kane. “None of these people have had insurance, so they probably spent more here than they would have if they’d gone to a professional tattoo artist. The worst part is that none of them were even good. I can’t even tell what this is supposed to be with all the discharge and inflammation, but my gut tells me whoever’s getting it has a cover-up appointment in their future.”

At press time, Calpin was seen sneezing into his hand, which he did not wash before continuing the tattoo, and Richard reported that he was beginning to hallucinate, but that the tattoo was “looking dope.”