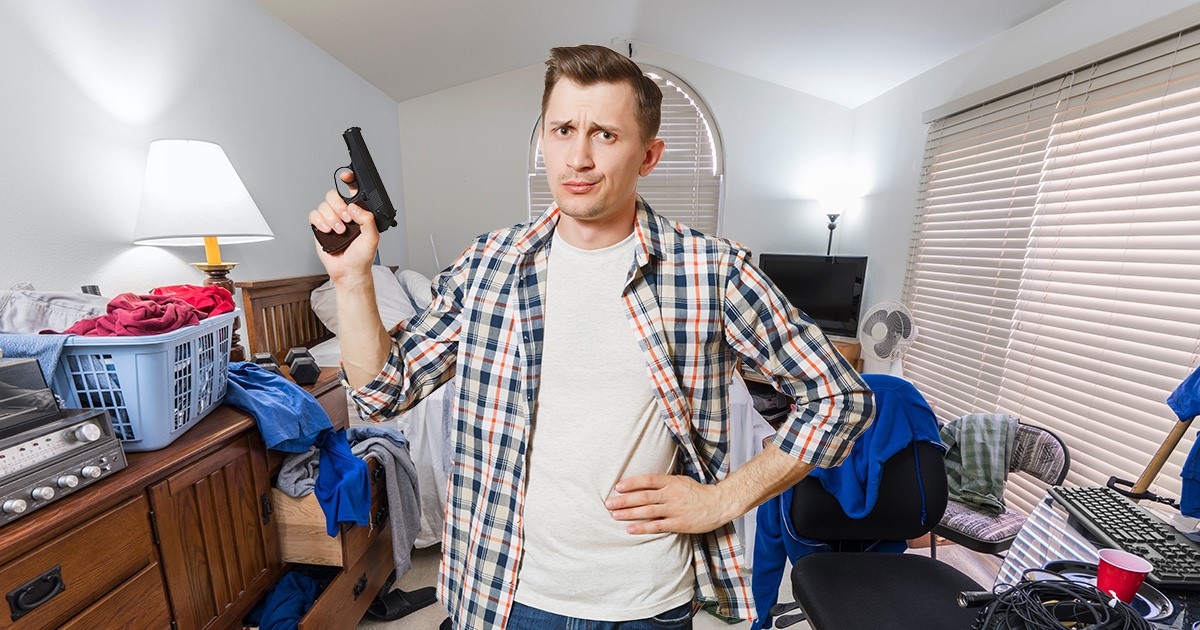 OMAHA, Neb. — College student and “good guy” with a gun James Watson was furious today after the latest in his series of romantic rejections, leading him to take a stand against women and their alleged desire to date “bad guys” with guns.

“I’m a nice guy who can make a woman laugh, and I also own multiple guns — so if they didn’t like someone, I could blow their frickin’ head off. But somehow, women refuse to have sex with me, and that’s wrong,” said Watson while taking a break from a marathon 4Chan session. “That Aurora guy had chicks worshipping him after that whole thing, and yet I’m treated like some sort of sick freak… even though I have guns way more powerful than his.”

“Maybe I just have to do something drastic in a department store during the holidays. I bet they’d want me then,” he added.

While Watson only recently publicized his complaints, he has a history of trouble with women, according to longtime friend Jack Keller.

“As long as I’ve known James, he’s made women uncomfortable,” Keller said. “In high school, he was nice to girls: complimented them, called them ‘m’lady,’ asked them before going in for a hug. Harmless, I guess. Then he got angry, like he felt girls wronged him, which made me a little concerned. But when his step dad bought him a gun after he got really into infamous mass shooters, I was relieved — he successfully channeled his anger against women into the desire to shoot mentally ill gun owners, and that’s super admirable.”

Fellow students, however, have criticized Watson’s behavior. Senior Ashley Thompson struggles to see why anyone would want Watson over a “hot, bangable, damaged bad boy” with a gun.

“He comes to lecture everyday in bootcut jeans with a small, embarrassing gun on his hip. It’s laughable,” Thompson said. “Sorry, loser. I want a rebel with a big gun and a bump stock — baddies like Stephen Paddock and David Long. Yum, yum.”

While Watson’s position has resonated with campus gun owners who also feel that women owe them attention, some believe these young men pose a serious threat.

“No, please — don’t entertain them, don’t enable this. It needs to stop immediately,” said psychology professor Audrey Carter. “They’re mobilizing. A militia of romantically scorned, unstable gun owners is dangerous. And now they think women crave mass shooters? This is really, really bad. A lot of people will die.”

The “Good Guys With Guns And Now a Plan” cohort will hold its first student club meeting this Thursday at 7 p.m. in Tenor Hall, room 217.