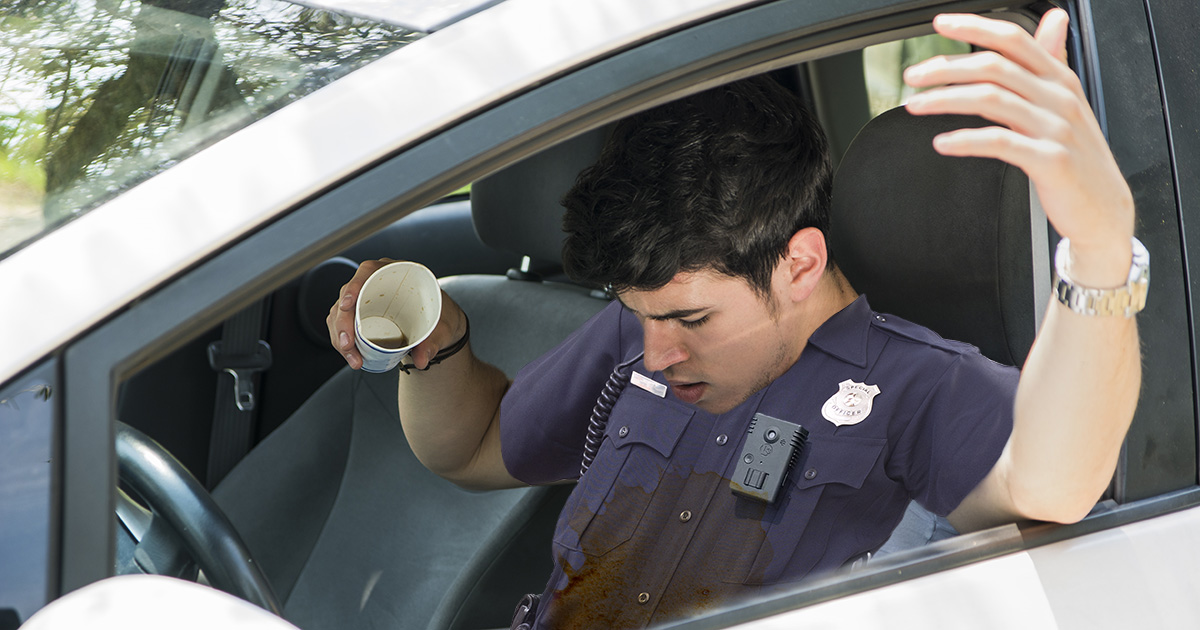 SIOUX FALLS, S.D. — Rookie police officer and self-proclaimed klutz Ofc. Dennis Barton totally embarrassed himself this morning, spilling an entire cup of coffee all over the body cam he’d already deactivated prior to answering a call.

“Dang it!” the murderous dolt exclaimed, as his Grande iced Macchiato dripped all over his uniform’s body camera just before reporting to his first day of work. “I woke up extra early, and got my hair in this box shape and wore my best Oakley’s… and then I go and spill my drink all over this weird plastic thingy. Why the hell would they put this right in the front like that, anyway? Where am I supposed to wipe my hands? Man, the boys are never gonna let me live this one down.”

Barton reportedly spilled the drink while responding to a call at a local apartment complex.

“I got a call about a ‘suspicious male’ on his phone in a parking lot. I really wanted to make a good first impression, so I knew I had to get there ASAP,” he recalled. “As I was getting out the car I grabbed my gun, and then when I went to double-check that the body cam was definitely off, my coffee slipped out of my hand… and the rest is history. That thing was almost $5! Fortunately, when the suspect asked if everything was OK, I recognized it as a sign of aggression… and let’s just say he’ll have to drink his coffee through a straw for the next 12 weeks.”

“Making a move on your first shift like that… well, that’s gonna be about four years of living hell you got to look forward to. And by living hell, I mean occasional light jabbing,” said fellow professional terrorist Ofc. Kari Webb. “But I can’t exactly talk — on my first day, I actually tripped over some kid I just beat the shit out of at a routine traffic stop. I don’t know how I ever got to sleep that night. People still call me ‘Linda Tripp.’”

At press time, Barton was spotted tear gassing residents attending a peaceful protest with his shoe untied. “Ugh. I look like a total doofus,” he said. “Geez.”