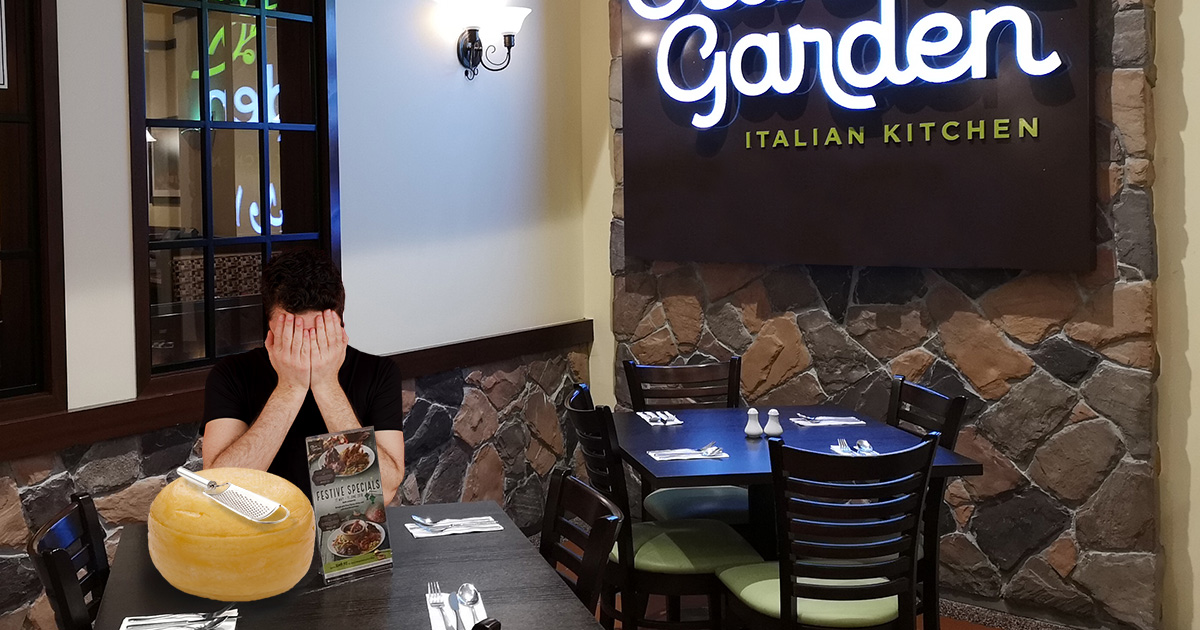 “I asked him if we wanted any shredded cheese on his Chicken Five-Cheese-Marinara Cavatappi and he said ‘yes.’ Then I just started turning that crank and he never said ‘when.’ Never,” Blanche Delgado, Roy’s server for the evening, stated while fetching another brick of cheese for him. “Finally he told me to just set the grater down and walk away without ever looking up from his plate. We aren’t supposed to do that, but I could tell he was in a bad place.”

“I was prepared to cut him off if I had to, but I saw him tuck the napkin into the neck of his shirt, so I knew he wasn’t totally far gone,” she added.

Roy, however, barely even remembers the incident.

“I guess I was in a bit of a fugue state. I don’t even remember driving to the restaurant. I just had a need to shove pasta in my mouth to keep from crying and suddenly there I was on my third plate of pasta and I was just making it snow with parmesan,” Roy reported after coming too in the afternoon of the next day. “I guess that is another Olive Garden I’m too embarrassed to return to. I’m going to have to drive all the way to Topeka from now on.”

Lola Sanchez, Olive Garden’s VP of Customer Relations, was not surprised by news of this event.

“This is a sight we see all too often at the OG, unfortunately. We have decided that it’s best for the safety of our staff and to avoid anyone making a scene to just let the customer have the grater and keep the breadsticks coming,” Sanchez explained. “We do charge them for the extra cheese, but most don’t even look at the bill when it comes, they just hand their credit card to the server and slink away into the night.”