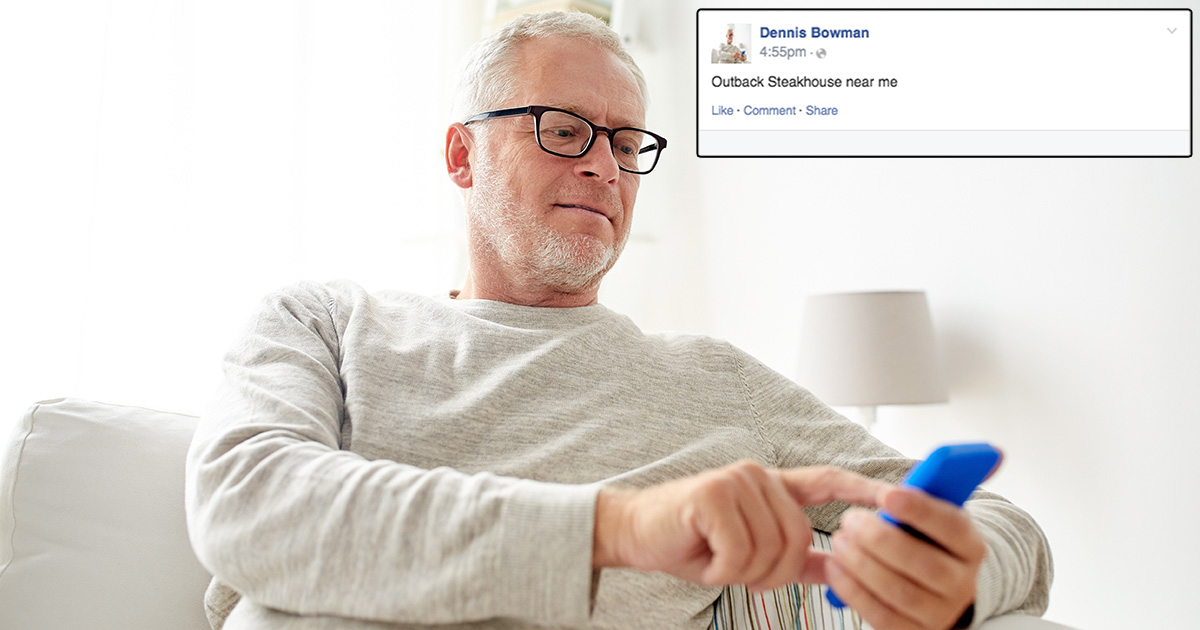 “Years ago, when he first set up his account, Dad wrote, ‘Chelsea this is your father Dennis Bowman I don’t know how to friend request please help love you,’” explained Bowman’s daughter Chelsea. “A couple days later, he posted, ‘Hello I love cornbread, dennis’ on Old Country Buffet’s corporate page before abandoning his Facebook account altogether. I assumed that would be the last I heard from him. Online, at least.”

Roughly three years later, Bowman shocked his family by returning to Facebook and asking no one in particular for the nearest location of the Australia-themed restaurant chain.

“I tried explaining to my dad that this is Facebook, and he needs to use Google, and he typed back, ‘nodear Im not on goggle [sic].’ So I sent him a link to the Outback website,” his daughter said. “At least now I know to get him an Outback gift card for his birthday instead of another shirt he’ll never take out of the box, I guess.”

Pam Lebowitz, Dennis’ older sister and only person to “like” his post, acknowledged her sibling has always been technologically inept.

“I’m not surprised. Posting that Outback message was such a rookie mistake,” said Lebowitz. “On the flip side, look at me: I copy and paste every post that asks me to, I always share memes that say, ‘Share This if You Support Our Troops,’ and I send all my friends periodic Farmville invites and the occasional poke. So, yeah — I’m real good at using Facebook.”

Dennis’ wife Angela was equally surprised to learn her husband was on social media, and that he was familiar with Outback Steakhouse — as “[Outback doesn’t] usually advertise in the local paper.”

“He watched those Crocodile Dundee movie years ago… maybe he heard of Outback Steakhouse there?” she asked. “I bet he wants to try one of those fried blooming onion dealies — or he’s got a coupon.”

When reached for comment, Dennis Bowman silently stared for a few seconds, then went back to reading a book about World War II.