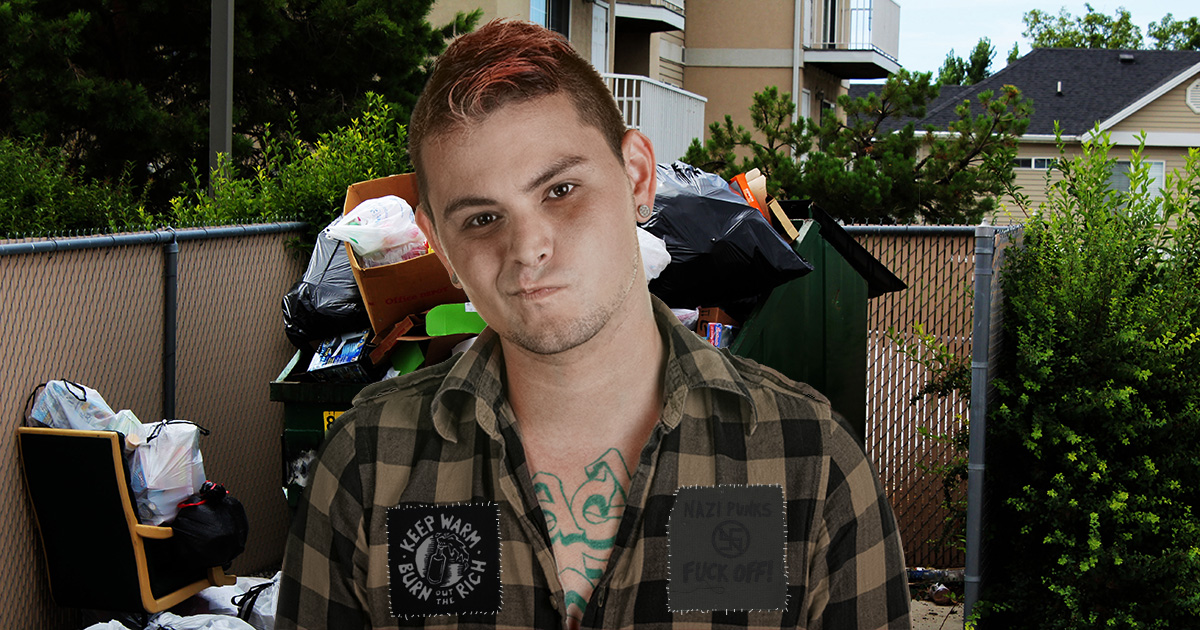 SEATTLE — Capitol Hill crust punk Steve “Skaggs” Sprewell is far more concerned about the raccoon flu he contracted while dumpster diving last week than the Coronavirus pandemic, according to feverish yet well-fed sources.

“I know everybody’s freaking out about the Coronavirus, but last time I checked, that shit doesn’t give you retractable claws and put rings on your dick,” Sprewell sprayed as he wiped foam off his lips. “It also probably doesn’t make you grow a domino mask made out of hair on your face. It totally blows that people are dying and shit, but I’ve had three people swat at me with a broom today alone… and my neighbor started bringing her cat food inside after she caught me scurrying away with handfuls of it in the middle of the night. So, I understand.”

When asked how he contracted raccoon flu, Sprewell credited an interspecies altercation that occured a week ago behind Yusef’s Deli.

“You know that street fight scene in ‘They Live?’ It was just like that, except replace Keith David with seven bloodthirsty raccoons with nothing to lose,” Sprewell said. “But when there’s that much leftover shawarma at stake, a few bites to the ankle, face, and taint are worth it.”

The crust punk’s unusual condition has not gone unnoticed by the Center for Disease Control, which has kept a close eye on the group for decades.

“Mr. Sprewell is the first known case of raccoon flu in the entire world,” said virologist Dr. Sandra Romero. “We have no idea what kind of mortality rate it has or whether it can only be transmitted through dumpster fights. The symptoms for raccoon flu include an aversion to sunlight, a total lack of dignity, and an all-consuming desire to eat trash. Frankly, I’m not sure how to tell the difference between an infected person and every crust punk in America.”

While the Coronavirus remains the CDC’s top priority, the department is taking steps to contain the raccoon flu from spreading by quarantining every crust squat in the city.