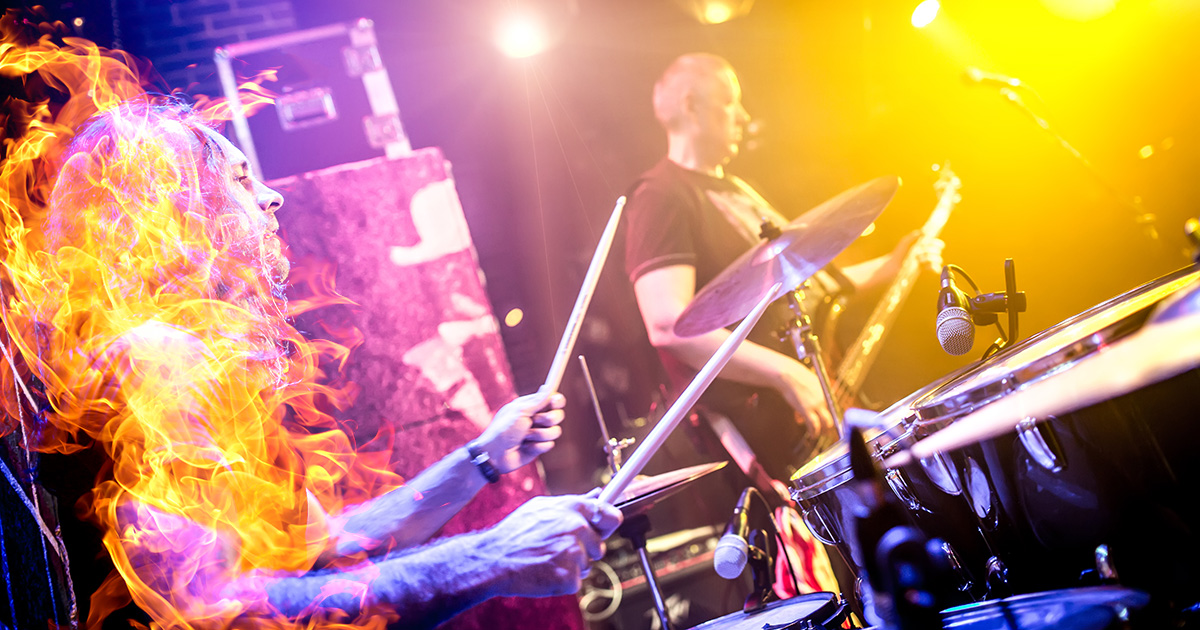 TORONTO — Concert goers were left baffled last night when drummer Gareth McGibbons of mathcore band Hyde Index burst into flames during the band’s second song, confirmed fans who were unsure if they were watching part of the high-octane show or witnessing a fellow human burnt alive in front of their eyes.

“Nobody knew if we should cheer or scream in horror as the smell of burnt hair and flesh filled the room. I’ve seen Hyde Index a few times and they always do something crazy, so when the drummer started running around the stage waving his arms after a large flame effect set him ablaze, we didn’t know if he was trying to hype up the crowd or gesture for immediate medical attention,” stated long-time fan, Amanda Turnbull. “The next thing we knew, he was lying on the ground as the band continued to play around his motionless body. It was right in the middle of a huge breakdown so nobody could get anywhere near the stage with a fire extinguisher.”

“Hyde Index has played here a few times and the drummer always does a dumb-ass stunt. Like the time he jumped off the full stack with his snare drum and injured six people. Another time he got shot out of a burning cannon onto hundreds of live scorpions and when I rushed out to help the lead singer got pissy and said I ruined the climax of the song,” said Perry. “Ever since then, I hang back until I can figure out what these morons are up to. All I know for sure is that skinny ass drummer did suffer third-degree burns to his entire body, but was smiling the entire time, so who the fuck knows.”

Though none of the other band members were available for comment after the show, the heavily bandaged McGibbons was tracked down at Cedars-Sinai Burn Unit and offered his take on the night’s events.

“Was the stunt planned? Maybe. Maybe not. Or was it an accident caused by the recklessness of the other band members who constantly force me into dangerous situations because they think it’s funny and they believe I’m easily replaceable? I guess we’ll never know,” said McGibbons while fully wrapped in gauze. “I’m just a little upset that this happened on the first night of our tour because I don’t know if I’ll be able to survive being lit on fire another 27 times.”

At press time, McGibbons was being prepped for another painful skin graft, asking anyone who’d listen if his bandmates ever showed up to check on him.