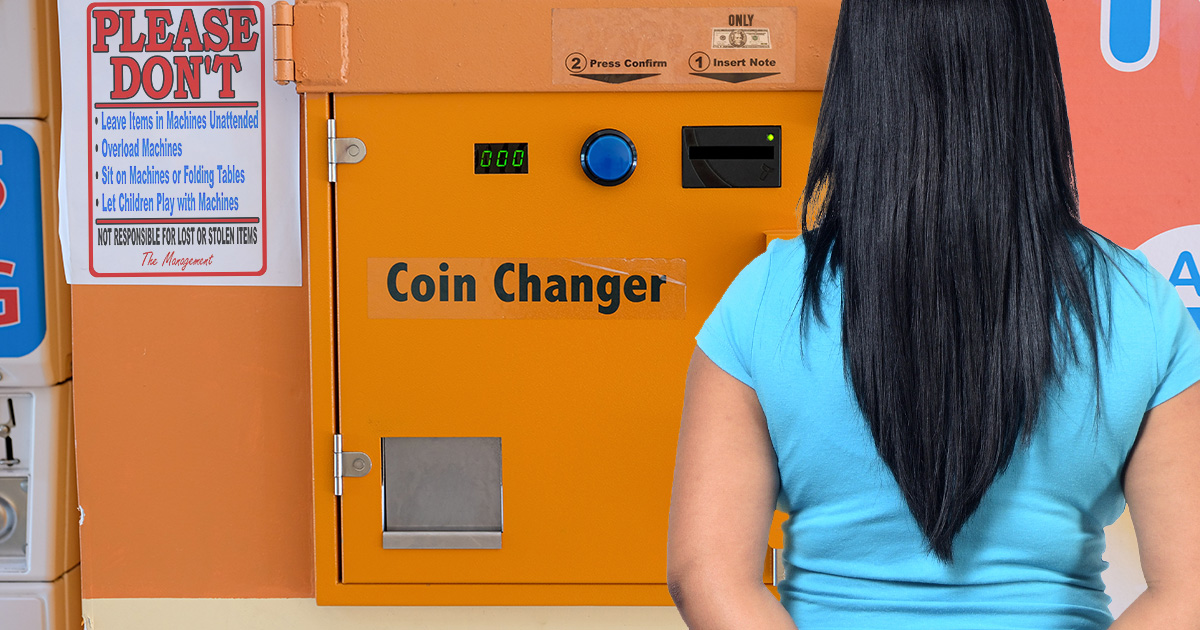 JOHNSON CITY, N.Y. — Local clothes launderer Dee Chanthavong nearly realized his lifelong fantasy of diving headfirst into a pile of shiny coins after being forced to insert a $20 bill into a change machine.

“I go to La Princessa because it’s close to my house and they’re open until 10 p.m., even though almost everything is broken every time I go in there,” she said, referring to a change machine that wouldn’t accept anything smaller than the largest bill in her wallet. “It wasn’t actually enough quarters to dive into and swim around in, or even try to pull off some ‘Indecent Proposal’ type deal where I roll around in them naked, but I did get to run my fingers through the bag and picked up a few fistfuls, which made me feel kind of powerful but mostly like I needed to wash my hands.”

While Chanthavong found the bright side to being endowed with surplus change, others were not so happy.

“I just needed a few dollars worth of quarters to dry my comforter and ended up spending $2.50 at an ATM to break a $20,” said disgruntled shop patron Maggie D’Angelo. “Now I’m stuck carrying 80 pounds of quarters back home with me on the fucking bus. I hate this shithole laundromat, as soon as I get a car I’m gonna drive to my parent’s house and do all my laundry there like a real adult.”

“If it’s not something about the doors getting stuck shut, it’s the giant pools of water leaking out of the machines — people just like to complain,” Biggs stated. “I don’t know what’s so bad about having a lifetime’s worth of quarters on you anyhow. You’ll never have to worry about parking meters, and if payphones ever make their comeback, which they will, you’re ready. Plus, if you lunge with that weight in your pocket you’ll do a pretty good number on the hamstrings, and I’m speaking to that from experience.”

At press time, Chanthavong was seen re-entering the laundromat with two more $20’s, wearing a red robe, bifocals, and a shiny top hat.