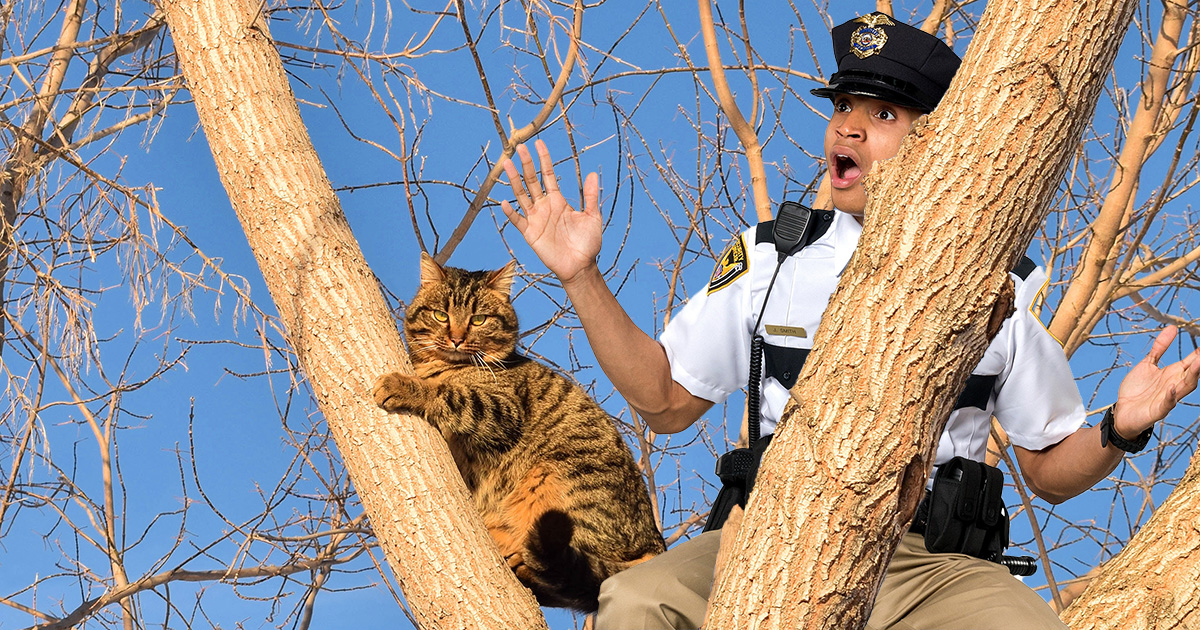 CHICAGO – A local cat known as Pudding saved an officer of the Chicago Police Department that ran up a very tall tree and got stuck after being spooked by a scary bug that caught him off guard, multiple sources report.

“Well, normally my Pudding just likes to chase birds and bring home dead mice as little presents,” said Pudding’s owner Norman Rogers. “He must have felt pretty sorry for that cop. We all heard the officer up and the tree crying and tried to guide him down because it was getting pretty annoying. One of the neighborhood kids offered to try to hit the cop with a football and knock him loose, but Pudding did most of the hard work herself. I was happy she helped someone, but I had to remind my cat that cops are not our friends, and it’s best to just leave them alone if you see them in the wild.”

Officer Adam Pierce gave his perspective of how the events unfolded.

“I had been out on patrol and I went to reach for my baton to brain some punk skateboarder when I noticed a millipede crawling on my belt,” Officer Pierce said defensively. “At first I planned on shooting it, but then it started crawling on my hand and it felt so gross. I got a tad bit spooked and decided to take the high ground. The really high ground. I must have been up 20 to 30 feet. God it was terrifying. But…errr uhhh I couldn’t find a good way down and that’s where Pudding came in. He’s a hero for sure, and I tried to make him an honorary deputy, but he just buried the badge I gave him like it was a turd.”

Community Activist, and staunch supporter of defunding the police department, Alicia Alvarez believes this is another example that shows police are ineffective.

“This doesn’t surprise me one bit. Historically speaking, anyone that seeks power through joining the police is a giant fucking dork,” Alvarez enthusiastically stated. “There was a cop that recently pissed himself because a bat flew over his head while he was harassing people at an encampment under a bridge. And another was frightened by a cockroach to the point where his teeth chattered cartoonishly and he jumped in his partner’s arms.”

At press time, several sources reported officer Pierce refused to jump in and save a helpless child from drowning in a pool because he had just eaten a big Carl’s JR lunch less than 30 minutes before.