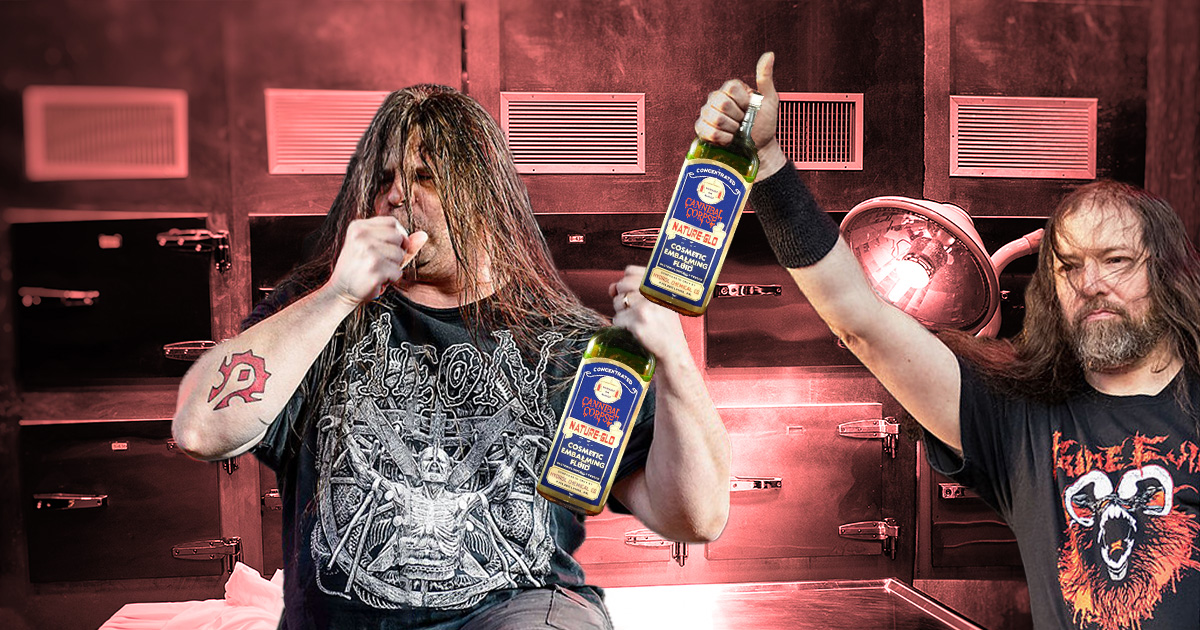 “We’re excited to bring our extensive knowledge about death and decomposition to the global market of funeral rites. ‘Cadaverous Conservation’ will enable fans to preserve their victims and do unspeakable things to their remains long past the carcass’ due date,” said singer George “Corpsegrinder” Fisher. “This embalming line isn’t just a cash grab; it’s a real passion project. We love our fans, and we hope that when they die — and let’s face it, that will happen before the age of 60 for most of them — they too will be embalmed with our line of products.”

“I’ve been in this game for 15 years — as a matter of fact, Cannibal Corpse was what made me want to work with human remains,” Nyquist said, draining the blood from a freshly expired human. “That probably sounds dubious, but fuck it. Whenever I’m working on a body, I’m always cranking some old school Cannibal on the bluetooth speaker. I’m hoping this endeavor is a success for them, because I’d love to see them expand to things like branded jars for storing organs, aspirators, or even sick-looking Cannibal Corpse artery tubes.”

Some fans are more skeptical, however, including Jake Morley, editor of the fanzine Corpzine.

“There’s so much else they could have done: hatchets, body bags, or even just organic cotton tote bags with a woman’s entrails printed on the side. Besides, what Cannibal fan wants to be preserved? We want to rot and bloat and pus,” Morley said. “When I go, I want to look like that dude on the cover of ‘Vile.’ Have you seen that? Screw this cute-looking corpse bullshit.”

Alongside the next Cannibal Corpse studio album, George “Corpsegrinder” Fisher is currently working on a cookbook solo project, with recipes for exhumed remains and roadkill.