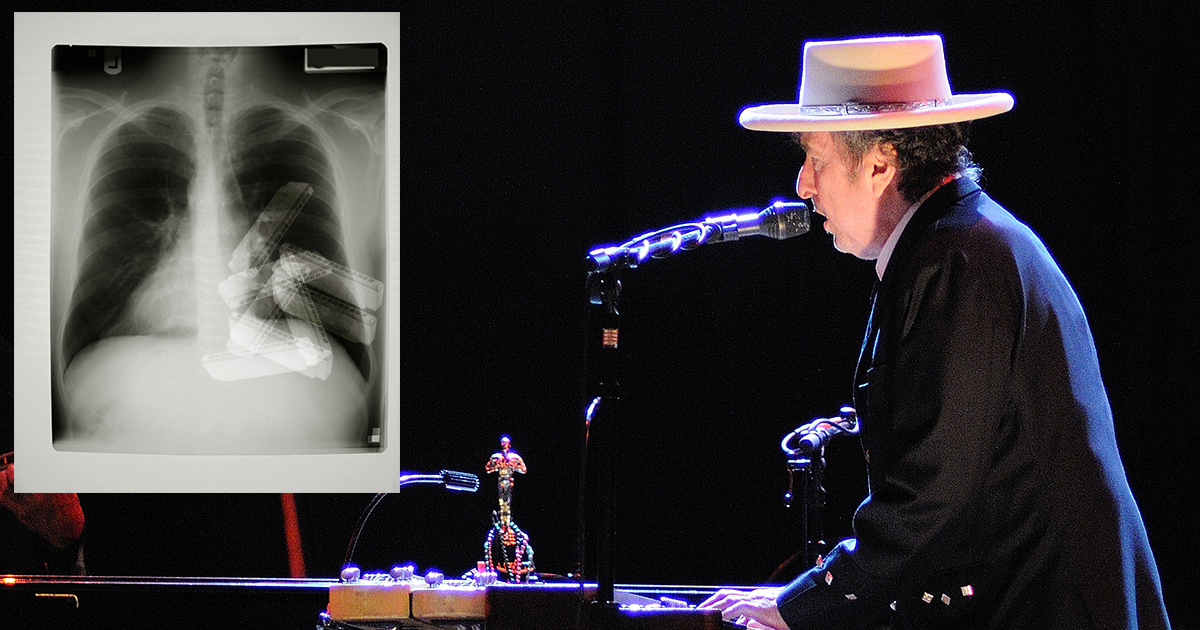 “This is something that isn’t terribly common,” said Dr. Lawrence Reiniger, the Radiologist who performed x-rays on Dylan. ”But it definitely isn’t unheard of. The thought of living decades with that many harmonicas inside your stomach is a medical marvel. They have to be ravaging the lining of his stomach. No wonder Mr. Dylan has a reputation for being a bit cranky in his later years, I would be too if I had several noisy, annoying instruments rattling around every time I walked down some stairs. Oddly enough though, he doesn’t exactly seem too concerned about.”

Dylan himself answered speculations on reasons as to how or why this could have occurred over time.

“Listen Maaan,” said Dylan in his trademark rash, nasally, condescending tone. “You people just don’t get me still after all these years. I’m a musical genius, but you know, I’m human too. And Humans make mistakes. Sometimes a genius musician gets lost in his intricacies, and maybe fails to remember the instruments he’s playing all at once sometimes. And that musician accidentally swallows his harp, then gets wrapped up in the busy life and neglects the fact that he should probably get the harmonica he’s eaten removed. That sorta thing can happen five, six, or in my case 37 times! Answer this one, big shot: ‘How many instruments must a man accidentally eat and forget about, until you call him a man?’ I’d say more than one.”

Randolph ‘Liver Spot’ Johnson, a Historian of American Folk music at the Smithsonian Institute, weighed in on the baffling discovery.

“We only know of one other such instance in Folk Music history that comes close to this. It has been documented that Dylan’s Idol, Woody Guthrie, would often eat harmonicas intentionally, but that was during the 1930s Great Depression and Dust Bowl era,” said Johnson. “Times were much tougher for a rugged folk singer back then, and one can assume Dylan’s belly full of mouth harps was created only by accident.”

At press time, it was reported that the black and white images of his x-rays inspired Martin Scorcese to film another documentary based on the brilliance of his harmonica ingesting.